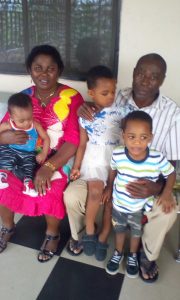 “We are Mr and Mrs Effanga Otu from Akwa Ibom State, Nigeria. We thank God for using His servant Prophet TB Joshua to break the yoke of bareness of over 18 years in our marriage! In 2013, Prophet TB Joshua prophetically declared that the yoke of barrenness would be broken in many homes. We thank God that we were counted among them! That same year we visited The SCOAN and received a touch from God. We were also privileged to receive the Morning Water (then Anointing Water).

“We continued to use the Morning Water and pray with the Man of God on Emmanuel TV and within two months, my wife was pregnant! She delivered a baby girl in 2014! In 2015, we had a baby boy and in 2017, we had another baby boy as we continued to pray with the man of God and minister the Morning Water! The God of Prophet TBJoshua is so wonderful to us! A house that was empty for 18 years is full within five years! Thank You, Jesus Christ!”