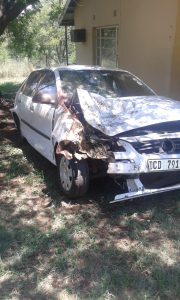 An incredible testimony of God’s protection power in an accident that could have proved fatal.

My name is Isaac Dzuunde Banda, originally from Malawi but residing in South Africa, Early 2014, my friend went to The SCOAN where he brought me a Car sticker written “LET LOVE LEAD”,  which I put on my Car. On 27 January 2016, my friend called me around 23:20 at night telling me that he was stranded with transport. I first told him that was too late & that he was too far; he begged me telling me that the place was a crime hot spot and he feared for his life. Because of that, I end up agreeing to help him. As I was on my way, there was another Car coming in front of me with full lights. I tried to tell the on coming driver to dim the lights by flashing my lights but he didn’t. By the time I was doing that, I didn’t know that there was a donkey on my side of the road. I ended up hitting the donkey and lost control of my car, then my car went off the road & jumped over the pit. From there, I just found myself standing next to my Car outside without a scratch or a single drop of blood. All the doors were closed and I don’t know how I got out of the car and I don’t know who took off the seat belt, {ONLY GOD} My Car is beyond repair, I thank God for saving my life and I thank God for what He is doing in this Ministry and we thank God for the life of our Father, Prophet TB Joshua, Emmanuel!!!!