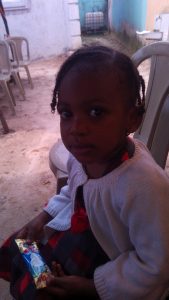 “My young daughter suffered from community acquired pneumonia for the past two years. She contacted it from her school. Everyday I prayed for her, cried and called on God to heal her because we always had to hospitalise her for days in order for her to be relieved. It would only last for a month or less and after that, it would return. We would go in and out of hospital every two weeks. I spent so much money to cure her and went to various hospitals for treatment. Whenever it starts, she would breathe heavily and I would have to wear her thick sweater and perform hot water inhalation. I always switched off the fan. She was not free to play with other children, to play outside or bathe without hot water.

“One day, I watched a healing on Emmanuel TV of a woman from Dubai who had hypersensitive pneumonia and was breathing with a respiratory tube. After Prophet TB Joshua prayed for her, she was healed, removed her tube and stood up from her wheelchair! My faith became strong. It was time for prayers for viewers all over the world. At 2:30am Nigerian time, Prophet T.B. Joshua was praying for viewers all over the world. I took my daughter from the room while she was sleeping and placed her hand on the TV screen. I lifted her up because the TV set was hanging on the wall.

“Then, I had the conviction she was healed! She sighed a great sigh of relief, which I have never seen before and shortly afterwards, sweat broke out a;ll over her body. I removed her sweater and put on the fan for her. The cold was gone! Now, she can play with water, wear a singlet without any issue and play with other children – like normal! Her nose began bringing out mucus daily, which usually only happened whenever she was given an intravenous injection to flush the liquid from her lungs. For the week after he healing, the fluid was constantly flushing out. I thank God – from Beginning to the End, there is no place for argument – the God of Prophet T.B. Joshua! Emmanuel! She is free till this moment which I write this testimony!! Thank You, Jesus Christ!”

What is your own situation? Pray along with Prophet T.B. Joshua on Emmanuel TV and receive your freedom, in Jesus’ name!