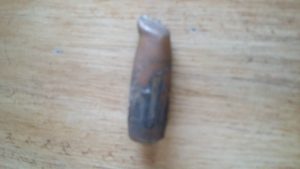 Ngathjwok Shawish Nyawell from the Republic of South Sudan knew she had to act quickly. She had no gun or mortar rounds. She had something else. She deployed it. It worked!

Night was falling fast. The heavy presence of military personnel showed something was amiss. Mrs. Nyawell and her colleague left the office. They stopped over at a hotel, hoping they could finish the project they had been working on all day and submit it to the minister, first thing the next day.

”It was Thursday, July 7, 2016, during the last crisis in South Sudan. As we inched closer to a place called Lou check point, we noticed that the atmosphere was charged. Armed soldiers were everywhere; their guns at the ready.”

Nyawell knew she had to act quickly. She had no gun or mortar rounds. She had something else. She deployed it. “I brought out my Morning Sticker and held it as I drove, praising God in my heart.”

She dropped off the colleague. Soon, it was the turn of a friend she had picked along the way. As he began to alight, he realised he had misplaced his phone. For a few minutes, they searched for it. But the security situation was worrying. “He decided it was wiser I left the area immediately. I zoomed off at top speed, hoping to pass through the check point as quickly as I could.”

About a hundred meters to Lou, something said to her, ”LOOK UP!” Suddenly, she saw flashes in the night sky. They were originating from Lou. She wound down the window. The sound was unmistakable. Gunshots were echoing in the distance. She made a hasty U-turn and sped to the home of a friend. “By the time I arrived there, the gunshots had become greatly terrifying. Kindly and courageously, the friend opened the gate to me, as I hurriedly went in. The chaos lasted more than an hour.”

Once again, Nyawell and her husband moved quickly. They positioned themselves with prayer. Armed with the Morning Water, she administered it around the house. “My husband kept saying that nothing would happen, as the house, through the Anointing Stickers, was already protected by the God of Prophet T. B. Joshua.”

At around 4 p.m., the gunfire intensified, drawing nearer, as frightened residents sought refuge. Suddenly, the couple heard a loud bang at the sitting room. A stray and deadly projectile had smashed into the house!

A potential tragedy averted, Nyawell is “full of thanks and praises to God for His goodness and mercy,” adding: “It is because of His favour that I am alive to share this testimony with the people of God.”