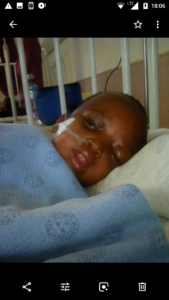 “Good Morning and Win Today! My name is Yolase Zazan from South Africa. By God’s grace, I received the New Anointing Water as an Emmanuel TV Partner. I have an amazing testimony to share! A friend sent me the picture of a young child who was rushed to the Intensive Care Unit in hospital after a gate fell on top of him. The situation was critical and he was put on oxygen. The doctors said that if they removed the pipe, the child would not make it. He couldn’t open his eyes or move his body at all.

The child was in the North West region whilst I was in Eastern Cape. When they send me the picture of the child, I ministered the New Anointing Water on his picture through the phone. By the special Grace of God, the following day they called me to say the child was released from ICU and was able to breathe by himself – after the New Anointing Water was ministered to his picture. Emmanuel!”