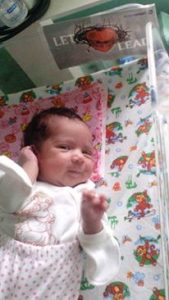 There was no chance her child would live. It was a medical verdict she was unprepared to accept. When therefore she found someone who could help out with getting the Morning Sticker, she put the advantage to best use and clinched a testimony.

November 2015 had Marie Ndam’s back in a disturbing corner. She had “some difficulties getting pregnant.” Luckily, she was no stranger to the constant stream of testimonies pouring forth from the Synagogue, Church Of All Nations (SCOAN). As soon as the month began its four-week descent, she mailed the church’s prayer team. The month hadn’t crossed its finishing line when her second mail from Kharkov, Ukraine, testified: “To God be the glory. I am pregnant!”

In Marie’s words, it was a “miracle pregnancy, all well and sound.” The childbirth was equally without difficulties. The baby however was born with a “terrible illness, and no one gave it a chance to survive”. No sooner was it out of the womb than it was rushed into the operating room.

Still recovering from labour, Marie was unable to send another urgent prayer request to the SCOAN. She however knew a student in Ukraine whose mother is a member of the SCOAN. “Through this woman, I was able to get the Morning Sticker,” she said.

Marie was allowed to put the Sticker at the head of my baby at the reanimation room where it remained for 10 days. During the period, she prayed as she “saw Prophet T.B. Joshua pray, and as he also taught us to pray.”

Filled with excitement, she declared: “I got the miracle! I have a miracle baby that miraculously survived when no one thought it would live!”

She thanked God for the ministry of Prophet T.B. Joshua, exclaiming:”What a blessing you are!”