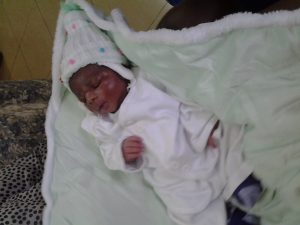 Edward Sieh Kanu and his wife tried all they could medically. Yet, the mountain of their five-year-old barrenness wouldn’t budge, until a friend asked if they knew about Emmanuel TV.

We had been married for over five years without a child. We tried all the medical solutions we could, to no avail. Determined to trust God, my wife resolved she would not visit any doctor again or spend any more money on drugs.

One day, a friend introduced us to Emmanuel TV. We installed it. There, we saw many testimonies of what God was doing for people. My wife and I continued to pray alongside Prophet T.B. Joshua, trusting God also for our own testimony. To His glory, my wife conceived without even knowing it!

Later, she went to a hospital. The doctor warned that she could lose the pregnancy. To keep this from happening, he said she had to be stitched. But my wife firmly refused, saying, ‘God will not share His glory with man. God gave me the pregnancy; He will protect it!’

The pregnancy continued to grow. When it was almost time for her to deliver, the doctor again said it could only be by Cesarean Section (CS), as she is above 30 years of age. He told her that her due date was October 26, 2016. As a result, the CS was fixed for October 12, 2016.

Unwilling indeed to share his glory with anyone, God ensured this doctor travelled overseas for a medical check up, early September, with a hope of returning to Sierra Leone, early October, for the scheduled operation. But on September 27, at about 1:30 a.m., my wife began to labour!

We rushed to the hospital. The nurses said she could deliver without CS. The doctor, however, had already stated on her card that she needed the operation. They called a personnel who was in charge and sought her advice. She told the nurses to attempt normal delivery until 6 a.m., but switch to CS if there was no progress.

At about 6:44 a.m., my wife gave birth to a bouncing baby boy! The hospital fee should have been seven million leones. To God’s praise, I paid only half the amount!