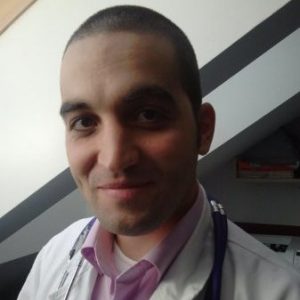 His marriage was as good as wrecked. The couple no longer lived together. Divorce papers had been filed, awaiting a judge’s decision. Suddenly, the disputants turned around, withdrew the case, and became passionate lovebirds. Get ready for a surprise!

Did you ever hit those situations when it seemed you were lost at sea, tossed about by a storm? If you said yes, you probably have an idea what happened to Ivelin Samra. When he visited the Synagogue, Church Of All Nations (SCOAN) with his wife, they had “family issues that made living together quite difficult”. They had a great week offering petitions at the prayer line and prayer mountain, and felt something positive had happened in the “spiritual realm”. They also met Prophet T.B. Joshua.

Their return to Bulgaria, however, opened a can of bigger problems. “As time passed, it looked like we merely travelled to Nigeria for a very nice holiday. Nothing more. The hiccups in our relationship continued. And at a point, things degenerated so awfully.”

In April 2014, the couple applied for a divorce. “We started to live apart. My wife took custody of the child, changed her job and began arranging her own life. Every day, when I return from work, I would take the four-year-old, so that I could spend some time with her. Later in the evening, my mother would take the girl back to her mother.

“I continued to live in sin. I said to myself, ‘We went to the SCOAN and nothing came out of it. Why not fly loose and catch some fun?’ I bought a motorbike and other stuffs I always dreamt of when I was a youth. But in my heart, I knew the things that were happening in our life were not right. Yet, I could not do anything about them. It was like being caught in a storm at sea.”

One day, Ivelin hopped on his motorbike. It would be a ride like none he’d ever had. As he revved the engine and hit the highway, he felt a stirring in his heart. He began to sing some gospel tunes. Soon, he was overwhelmed by a burden to pray. “I cried to God, ‘Lord, please convert me! Please, convert me!’”

It was a supplication from the “bottom” of his heart. The bike roared the same afterwards. The wind whistled as it had always done. But somewhere in the depth of his soul, Ivelin knew he had just flown past a satanic barrier. He would never be the same again. “I knew it was a prayer with a difference,” he said. “It was like those prayers offered at the SCOAN; prayers that transform a person’s life.” Shortly after the experience, Ivelin Samra “started using the Morning Water every day, and confessing the prayers in the booklet.” A miracle was inevitable.

One day, his estranged wife received a letter from a court. It requested reason for dissolution of the marriage, and she wanted the matter discussed. There was, however, something about the meeting that beat his imagination. It was nothing like the war of words they had had in past months. According to him, “it was then I realised that the Lord was fighting for us; resolving our matter. It was the first time, in a very long while that we talked like normal people. We were calm. We didn’t argue. There was no rude attitude either.”

Action on the divorce, as it turned out, had been delayed because the judge on the case took ill. Ivelin, however, distilled the turn of events and concluded: “It was the mercy and love of the Lord Jesus Christ towards us.”

The quarrelsome duo began to see each other as sweetly as they had done before they tied the knots. “After some weeks, we decided to stop the divorce process. We asked the judge to withdraw the papers. We moved together again and started living like a family. It was like honeymoon all over again. Old things passed away and all things became new. No more quarrels. No more rudeness. No more hidden things. Now, we are a family for the glory of God!”

Having experienced the phenomenal power in the Morning Water, there was no stopping Ivelin. He began to use it “every day, even more than once sometimes”. It was his companion on December 19, 2016, as he prepared to take an examination that made “all my colleagues so nervous”.

When he opened the folder, he found three questions he “could not say anything” about. “I was thinking of cancelling the examination when I remembered the words of Prophet T.B. Joshua: ‘I know my God! He will never leave me!’ I decided to go ahead with it. It was a miracle how I managed to stand before the professors, provide good answers to their questions, and by the grace of God, passed the examination!”

As Ivelin continued to administer the Morning Water, his testimonies increased. The persons he had issues with at the hospital where he worked started to leave. Some were fired. Others left in seeming sympathy with the sacked ones. And on February 1, 2017, he was appointed head of the cardiology department! What more, his sweetheart also got a new car!

Thankful, Ivelin testified: “I now enjoy peace and harmony in my family, my career, and in all that pertains to my life. I know that all these changes started in Nigeria after I received a touch from Prophet T.B. Joshua at the prayer line. I give God all the glory.”