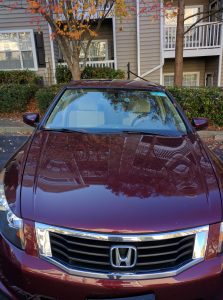 At the top right-hand corner of the windshield is a Morning Sticker. Then a thief makes a costly mistake. A prospective buyer changes his mind. A crook disappears. And a car is returned to its owner. Let’s get to the root of this mystery…

The message was short. Disturbing. “Hi! Just wondering. Didn’t see your car in the parking lot.” It was from a friend with whom he shared the apartment.

“I knew instantly that something was wrong,” said Siju George. A software engineer in the United States, he had returned to his home country, India, for a three-week vacation. Now, barely seven days into the holiday, trouble had come knocking at his door. Since he hadn’t given the key to anyone, a nagging conclusion rang in his mind: “Someone has stolen the car.”

Even though he was worried, Siju put his trust in God, believing the Almighty’s Hand could recover the vehicle. Besides, he had a consolation. Perched atop the right-hand corner of the windshield, the Morning Sticker, like an eagle, watched the car and its surroundings. “I was therefore encouraged that I would not lose the car. I told my wife the car was gone. There wasn’t much we could do about it, but God would give it back,” he said.

“Inform the apartment office and get them to work with the police,” Siju told his friend. Few minutes passed. He received a voice mail from U.S. police officers. What could they be calling him for?

“I called them back with the number registered in the voice mail. They asked whether I sold my car to anybody. ‘No,’ I answered. They confirmed that the car had been stolen, saying they would let me know if they found any further information.”

Siju continued to trust God. An hour later, he had another voice mail. He called back. “Your car has been recovered! We have it!” said a police officer.

As it turned out: hopeful of a quick sale, the thief had put up a notice on a classified advertisements website. But as he haggled with a potential buyer, he accidentally dropped the word ‘stolen’. Was that a mistake? Uncomfortable with the ‘word’, the would-be buyer quickly alerted the police. And as officers stormed the crook’s apartment, he took to his heels.

Siju has a piece of advice for you. Hear him: “Trust in God and He will not disappoint you. You will find that He is reliable and your faith will grow further.”

But that’s not all. He adds: “Believe in the faith tools our anointed Man of God, Prophet T. B. Joshua, has given us!”

Have you received the faith tools?