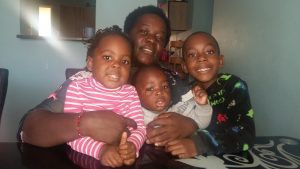 “Emmanuel! I’m Wilhelmine Shushe from Namibia. I have a testimony to share to the glory of God. When I got married, I could not conceive for a year because I was diagnosed with ovarian cyst, which I finally had an operation for. After the cysts were removed, I managed to conceive but because of the operation I had, my Doctor told me I could not deliver naturally but through a caesarean section only – which I did.

“Three years later i become pregnant again and the night I discovered I was pregnant, I had a dream where an evil being came and told me I would still be operated. In that dream, I could already feel the painful stitches across my belly. In that dream, I started taking them out and declaring that I would not be operated upon because I serve a living God! Because of what I saw in my dream, I decided to come to The SCOAN in December 2016 when I was 6 months pregnant.

“Prophet T.B Joshua prayed for me and he gave me Morning Water which I ministered throughout my pregnancy. When I was about to put to bed, my doctors started telling me that I cannot deliver naturally because of the previous operation. They warned it was too risky and my uterus could rupture which would put me and the baby at risk. Because of my strong faith, I rejected such plan. My doctor was angry and even made me sign a document that I didn’t heed his advice. I continue praying and ministering the Morning Water, knowing God would see me through. When labour came, I went to the public hospital and to God be the glory, I delivered a bouncing baby girl safely without any operation!

“In 2017, I became pregnant again. When i was about to put to bed, the doctor again insisted it was still risky for me as the baby was too big for normal delivery. I stayed at home and continued praying to God to see me through as He had done in the previous pregnancy. When labor came, I went to the hospital and delivered a bouncing baby boy without any operation! When they were busy cleaning me up, I could hear the Doctor asking the nurse how I managed to give normal birth for the second time with a previous history of caesarean!

“People of God, our God is God of impossibilities and I thank Jesus for His mighty intervention in my life. To the women with similar cases, hold on to God, have faith and He will see you thorough!”