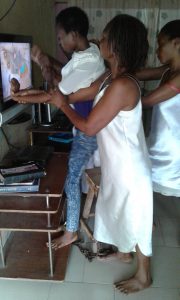 “Emmanuel! My name is Comfort John from Rivers State, Nigeria. I have a wonderful testimony to share about my daughter who was healed from a terrible spiritual attack through Emmanuel TV. Onisokeiyeme John, our daughter who is 24 years old this year, secured admission into the Federal College of Education, Omoku in 2014. She then proceeded for the clearance and other admission formalities. During this period, she returned one day with a report that something entered into her. From this day onward, everything about her began to change. She started having terrible depression and became withdrawn from everyone, including us the parents and all her siblings.

“At a time, she became very aggressive to all, even to us, her parents. She made comments such as, ‘I am no more part of the family.’ ‘I can die any day.’ ‘I will destroy the family.’ We tried our best as parents at this point in time by taking her for prayers here and there but to no avail. She even destroyed her own phone and her younger sisters one by smashing them on the floor. At a certain time, we resolved to take her to a psychiatric hospital where she was confirmed insane with a written medical report.

“During the period that our Prophet of the Most High God for this generation, Senior Prophet T.B Joshua, announced to viewers all over the world about climbing onto The SCOAN Altar and subsequently prayed for viewers all over the world, we (through the help of the HOLY SPIRIT_ persuaded her to touch the screen of our television. It was at this moment that calmness came into her life after being in these chains for years. Thank You, Jesus Christ!!!”