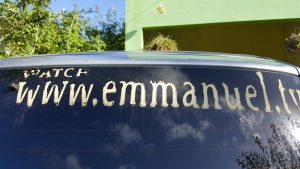 Good Morning!
My name is Claudia Forbes and I live in Jamaica. I was possessed with the spirit of masturbation for over twenty years. I tried to stop but would always revert to the habit. Even though I felt ashamed after the act, I couldn’t help myself. It affected my progress in many ways. I day-dreamed a lot and developed a debilitating fear that caused me to isolate myself from others, I became literally afraid of people and had very little self-confidence. I also experienced demonic attacks. These spirits would physically touch me. There was a time when every night I was shaken awake at the same hour. They sucked my breast, and sank their fingers into the flesh of my bottom which affected the muscle or nerves in my buttocks to the extent that I had problems walking for weeks. Despite this I would always run to God for help, I kept asking Him to deliver me and kept reading His Word. One day in 2010, a friend came to the house and offered to install a small satellite receiver that would only be able to broadcast religious stations in different languages.

About six months after installing the dish, I was browsing through the channels and found Emmanuel TV. To God be the glory. Initially I did not believe, but the more I watched, the more I realized that many people had similar stories about demonic interferences in their lives and the dreams they had were very similar to mine. Emmanuel TV then became a part of my daily diet, I slept with it on and watched and prayed along with the prophet every chance I got. I began seeing Prophet TB Joshua in my dreams – touching my forehead, going to a cave in my yard and picking up small stone gods (the cave does not exist in reality); going to a family cemetery (which exists); in one of the dreams he even told me to visit the SCOAN.

With this deliverance came promotion. I was working for over twenty years as a high school teacher and after praying with the prophet as he declared breakthrough in my career, marriage and destiny, I was successful in obtaining a job in 2017 as a lecturer at one of the most prestigious teacher training Institution in Jamaica, The Mico University College . To the amazement of many of my colleagues, I was privileged to receive one of the teachers’ flats – something many who have been employed to the institution for years, wanted. Within the space of eleven months I was told that I would be made permanent and was asked to complete a 503 permanency form. (There are persons who have been employed on contract at this institution for over seven years and still have not received their permanency! )

I thank God every day for this station and continue to tell others to watch it. The rear windscreen on my car reads: Watch www.emmanuel.tv. This in itself is another miracle. This vinyl print has been on my car for over five years. Usually a vinyl print begins to peel after a month but I noticed that the sign became embossed onto the windscreen. Persons have attempted to remove it but found that it required much effort to be scratched off. About three years ago the artist who installed the sign asked me what I did to the sign and said it looked as if the car went through fire to have caused the edges of the sign to look the way they do. I told him The Holy Spirit burnt it on to lead people to the truth. I encourage my students and colleagues to watch Emmanuel TV.

I believe someone will be impacted by what I do to promote the viewing of this life changing ministry. God bless you Prophet TB Joshua. I think praying for you is my mission and I do it so regularly that I sometimes feel God is tired of me harping to Him about you and your team. Thank you and God bless you all.