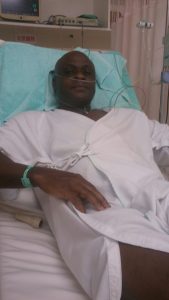 Delivered From A Heart Attack!

Delivered From A Heart Attack!

The doctors said it was a myocardial infarction. He called it a spiritual onslaught. And while they administered care (all they could really do), prayer eventually delivered the victory.

They were five days of trouble; a “trying period,” according to Gabriel Iriase. From July 15 to July 19, 2016, he was confined to a hospital bed. “It was severe,” he said. “But for God’s intervention, I would have embarked on the journey of no return.”

Death had actually come knocking on a day he least expected. Its grisly hand reached for his chest, forced its way into his body and grabbed his heart with murderous intent.

“HEART ATTACK!” the doctors called it. But Gabriel, who lives in Japan, thought otherwise. “I felt it was a spiritual attack,” he said. Nurses also almost never found a vein through which they could fix a syringe for life-saving infusion.

What he made of the anguish that suddenly pummeled his body influenced his decision. “I sent a prayer request to the Synagogue, Church Of All Nations (SCOAN),” he said, adding: “They prayed and God heard!”

“Thanking everyone,” for standing by him in supplication, Gabriel testified: “As time went by, I recovered, was discharged from the hospital, and have returned to normal life!”