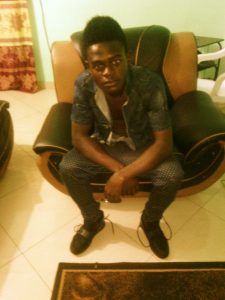 To touch or not to touch the TV screen as Prophet T. B. Joshua prayed on Emmanuel TV was a question on the young man’s mind. He needed the divine intervention which faith alone could bring, but was curious what the outcome would be. When finally he placed his hand on the gadget, a transforming power flowed through his body. He would never remain the same again.

I always prayed to overcome the problem. But this was to no avail. I met a friend who viewed Emmanuel TV in his house. One day, as we watched, I saw the Man of God, Prophet T. B. Joshua, praying for viewers all over the world. I believed many people were touching the screen by faith and praying along but I couldn’t bring myself to do the same. As I made effort to stand up from my chair, a thought crossed my mind: ‘Don’t do it. The man is not a true servant of God. He will destroy you!” I sat back.

My doubts began to melt afterwards. One day, as the Man of God prayed, I rose and took slow steps to the TV. I stood there for a while. Then I reached out my hand and placed it on the screen. I will never forget what happened. A vibration ran through my body, after which I became weak. Before the experience, I found it difficult to pray; I was always overtaken by sleep whenever I tried. Now, after receiving my deliverance through the Man of God, prayer has become a delight. My bad dreams have stopped. And most importantly, the urge to masturbate has disappeared!

I thank God for my new life. Emmanuel!”

Are you struggling with a similar bad habit or addiction? Pray along with Prophet T.B. Joshua and receive your own deliverance, in Jesus’ name!