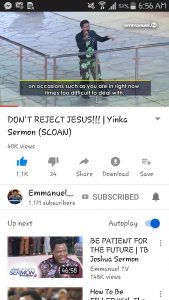 How EMMANUEL TV Rescued Me From Becoming An Atheist!!!

How EMMANUEL TV Rescued Me From Becoming An Atheist!!!

NGUENGO JOÃO BONDO from ANGOLA shares the touching testimony of how an Emmanuel TV YouTube video renewed his faith in Jesus Christ:

“I have been going through challenges for some time now in the areas of barrenness and problems with my job. Things are just not moving forward! On Friday 22nd February 2019, in the morning I told my wife that if things didn’t change soon, I would become an atheist this year. I asked her, “Where is God? If I even call for a family meeting, it means I’m saying my family are stronger than my God.” I repeated to her that I was planning to become an atheist. On the same day in the evening, I took my tablet to watch some videos and a voice inside me said to me, ‘It’s been a long time since you watched Emmanuel TV. You have the satellite for Emmanuel TV at home but you don’t watch it anymore. Now you’re focused on other TV programs. On YouTube, you only watch other channels, not Emmanuel TV. Whats wrong with you? I want you NOW to open Emmanuel TV!’

“Then I opened it. I wasn’t interested in the first video I had opened and wanted to quit. Then the voice told me to watch another one. I resisted a little bit to but then I opened the second video which was a sermon titled, ‘DON’T REJECT JESUS!’ This preaching, the message was very powerful. I said inside of me – “This message is for me!’ This message changed the thoughts I had about becoming an atheist and thinking God was not doing enough. I watched this video over and over three times! Actually, if it was not for this message, I don’t know what would become of me. Because I now realise that rejecting God, rejecting Jesus is rejecting the light and the truth. It’s like embracing darkness. By watching this message on YouTube, I was saved from going into the darkness. I felt very guilty because God always helped me since I was kid; God has always been with me. I felt that I broke God’s heart and asked Him for forgiveness. I thank God for showing me that I was wrong!

“Thank you Prophet T.B. Joshua! Thank you Yinka for the message! Thank you Emmanuel TV Partners!”

You can watch this life-changing message here: