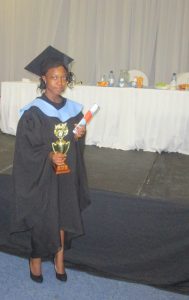 A student receives two prophetic instructions from the Man of God, performs the two acts of obedience required, and gets two astonishing results.

Her 2008 visit to the Synagogue, Church Of All Nations (SCOAN) couldn’t have been more timely. Having begun her tertiary education in August 2007, she still had an important decision to make. “I had not chosen my major, which could be Environmental Science, English or Sociology,” she said. It was with gladness therefore and an open heart that Bosede Comfort Oluwayomi heard the Man of God say to her: “MAJOR IN ENGLISH, THEN DO LAW.”

If she thought it would be smooth sailing afterwards, she was wrong. At the University of Botswana, the undergraduate faced “so many” challenges. There were times she had emotional problems. Sometimes, she was at the trenches, fighting in spiritual battles. At other times yet, her academics hobbled along, hurt by financial blows. But guess what? At the end of the programme, the young lady received a “total shock.” She graduated with a FIRST CLASS degree!

Following her sweet victory, there could only have been one thing left to do: latch on to “God’s plan” to do Law. Bosede enrolled for a Diploma in Law at the Gaborone Universal College of Law and Professional Studies.

But no sooner had the programme begun than she realised it would be no easy ride. “It was a tough journey because I had no background in law, like the other students in my class. I became frustrated. I felt I would never be able to make it through.”

Then stepped in her parents. “They encouraged me,” she said. “They also urged me to use the Morning Water whenever I prayed. This I did continually.”

Finally, came November, 2014. Students numbered hundreds. It was the great moment they had toiled through the nights for. Clad in her gown, she waited, as names began to be called.

“BOSEDE COMFORT OLUWAYOMI!” the announcer’s voice boomed from the speakers. Amid cheers, she walked forward to receive the coveted certificate. But the man had more to say about the recipient striding towards the podium: words she never expected.

“I was excited to have finished successfully, in spite of the demanding final year project I did on the death penalty,” she said. “I simply showed up for the ceremony. I was not aware any award would be given. But to my utter amazement, I was named BEST STUDENT IN LAW, CLASS OF 2014! Tears welled up in my eyes. My heart thumped with joy. I never saw it coming.”

Grateful to God for “His Spirit of excellence” that has followed her since she visited the SCOAN in 2008, Bosede testified: “Without Him and the medium of the Morning Water, I might have failed miserably because of the fear that plagued my heart at the beginning of the programme.”