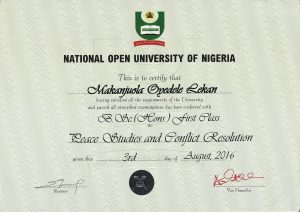 For almost three decades he was harassed by a BIG problem. Yet, all it took to be free was a SMALL act of faith; simply placing his hand on the TV screen as Prophet T.B. Joshua prayed.

The preacher’s voice jumped out of the television and sat beside Makanjuola Oyedele Lekan. It brought it’s lips closer to the ear of the 45-year-old from Ekiti State Nigeria. “Distance is no barrier to receiving your miracle,” it whispered. Then it added: “You can experience a total breakthrough.”

Just at that moment, someone knocked on the door. It wasn’t the confident rap of a familiar hand. Quickly, Lekan grabbed the remote control and changed the channel. He preferred to be found watching something else – anything really – than be caught with eyes glued to Prophet T.B. Joshua on Emmanuel TV.

The secret affair began in 2010 after a brother encouraged him to install the channel. “Out of curiosity,” he danced along. In the course of time, however, the shy viewer developed a “small measure of interest” in the station and in the Man of God. “I would change from Emmanuel TV to another station whenever anyone outside my immediate family knocks at my door,” he recalled.

Lekan, meanwhile, was being tossed about by a strange spell; he couldn’t wriggle free from a satanic “web of academic stagnation and career absentmindedness.”

He described the terrible ordeal: “Early in life, I had a vibrant urge and a great potential for academic success. But somewhere along the line, I lost every passion and will for education. Although I received a lot of advice and encouragement from friends, relatives and others, who were aware of my God-given potentials, yet I was helplessly incapacitated. I was blind to why going back to school was needful. I felt fulfilled in my world of failure.”

Lekan fished for an answer to the many questions he had about Emmanuel TV. Are the miracles real? Could he experience similar breakthrough? Is T.B. Joshua a true prophet of God? “At a point, I knew I had to make a decision, once and for all, to be for or against,” he said. Gladly, after a “critical Biblical review, aided by the leading of the Holy Spirit,” he finally embraced the broadcast channel!

One day, Lekan felt a burning desire for a touch of God. (His family had since formed a habit of praying along with the Man of God in the morning before they left home and in the evening when they returned.) “As we touched the screen and prayed along with the Prophet,” he said, “I felt as if a burden was lifted off me.”

That night, he had a peculiar dream.

I was stuck in a pit, deep, dark and muddy. I tried again and again to climb to the top. Unable and weary, I sat down dejected. Suddenly, I looked up. Something stood at the mouth of the trap. It was a human. It was Prophet T.B. Joshua! I reached out my desperate hand. The Man of God grabbed it. “ONE! TWO!” he shouted. And at once, I found myself at the surface! RESCUED!

When Lekan woke up in the morning, he knew instantly he would never be the same again. He felt “lighter and livelier.” He told the dream to his wife. “God has finally visited our family,” she said. She couldn’t believe her ears, however, when he returned later in the evening and sang an entirely different song.

“Dear, something has happened to me,” he said excitedly.

“Happened!?” she asked in amazement, as her mind hurriedly probed the animated look on his face. “And what is that?” she asked.

“I have a very heavy burden to go back to school,” he dropped.

For a moment, they looked into each other’s eyes, as a huge blanket of silence descended on them. For a moment, she had only a wry smile. But it thundered a monumental question: “Do you mean to tell me that after 27 wasted years, you want to pursue a course? Are you serious? Is this some kind of a joke?” Two days later, however, Lekan closed every inlet of doubt in the woman’s mind. He “confirmed” his readiness by showing her an “admission letter for a Bachelor’s degree!”

His new-found enthusiasm received a boost when, few months later, he watched the testimonies of Mary Jean and Yinka Oduwole, two students who made wonderful strides in their education, also inspired by Prophet T.B. Joshua.

As he touched the TV screen, he uttered a word of prayer, claiming a First Class degree. “I am tapping into these young girls’ anointing for excellence,” he told his wife and children, believing he would also share a glorious testimony at the end of his programme.

Did it happen? ABSOLUTELY!

On August 3, 2016, Makanjuola Oyedele Lekan was awarded a FIRST CLASS DEGREE in Peace Studies and Conflict Resolution from the National Open University of Nigeria!