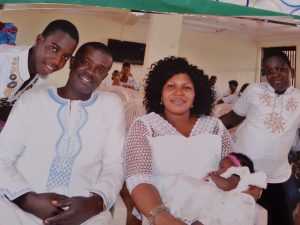 Gift Of A Baby Girl On Prophet T. B. Joshua’s Birthday

Gift Of A Baby Girl On Prophet T. B. Joshua’s Birthday

The Biblical words, ”Ask and it shall be given unto you,” are true, testifies Mrs. Claudia Amoah from Ghana.

“I visited the hospital June 10, 2016 for antenatal check up. My pregnancy was exactly 40 weeks old, and the doctor scheduled me for a C-section on June 14, 2016. I did not agree with him. He insisted, saying the decision was in my best interest, given my history of hypertension, and because the baby was big. He concluded that I should be admitted Monday, June 13. But in my heart, I believed that I would deliver naturally. I administered the Morning Water, which I got from the Synagogue, Church Of All Nations (SCOAN) in March, and prayed.

The ultra sound scans I had during my pregnancy indicated my expected date of delivery would be June 10 and 14. On June 5, 2016, I sat watching the live service at the SCOAN, as I always did on Sundays. The Man of God declared that the following Sunday, being his birthday, he would pray for people on the prayer line. I watched Emmanuel TV on June 11 and prayed along with the Man of God. I told God that I wanted my baby to have the same birthday with Prophet T. B. Joshua.

On June 12, I woke up at 2 a.m., and realised that my contractions had started. I prayed again and returned to bed. I couldn’t sleep, however, because of the pains. I continued to administer the Morning Water. I also called the prayer line of the SCOAN at 1 p.m., when I was about to leave for the hospital. One of the evangelists prayed with me.

When I arrived at the hospital, the nurses insisted they would call the doctor to perform an emergency C-section, since I had already been booked for the procedure. I refused. After a while, I was taken to the labour ward where I delivered safely at 8 p.m., to the glory of God!

The name of our baby is Pearl Aseda Amoah. Aseda is the Akan word for ‘Thanksgiving’.

I asked, and the Lord granted my heart’s desire for a female child, since I already had two sons.

May God continue to bless Senior Prophet T. B. Joshua, his team and family.”