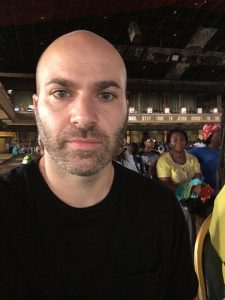 For 9 years starting in 2011 and ending 2020, out of nowhere I developed a condition called SIBO. It had restricted my diet to a specific diet known as the FODMAP diet. The condition in simple terms is a bacteria imbalance within your gut system, most specifically the small intestine. The complications would come when I would eat certain foods which resulted in the feelings of nausea, bloating, gas, dizziness, fatigue, a sensitive stomach as well as extremely uncomfortable bowel movements.

I would explain to people around me many times that I was not feeling good and eventually hid my symptoms and my feeling of sickness from them to appear as functioning normal around others, as no one really believed me. This was something that was very difficult as I could not eat healthy fruits and vegetables without feeling tremendously sick. Often, I would retreat to my house and lie on my stomach until I felt better.

It was a long journey and a daily journey but through it, God was working out what He had to work out in me. There were times I would lay on my bed and think that dying would be a better way of life. I searched all over the internet one day and found that certain diet called FODMAP and following that gave some help – but it was never a permanent solution. There is no real known cure for SIBO. The solutions given may work but they are very intense to follow and are not necessarily permanent.

I have known about the ministry of TB Joshua for a long time. In early 2020, I made a trip to The SCOAN, putting my hope in God to heal me. I knew from a prior dream I had – where I saw Prophet TB Joshua confirm what I already knew – that the reason behind my sickness was an attempt from satan to stop me from growing in Christ. My faith was strengthened over time with this dream as well as the sermons from TB Joshua.

I stopped complaining and didn’t lose heart, as this was a test of faith and God was using it for my own growth. When I visited The SCOAN in early 2020, we received some of the altar fruit to eat. I grabbed a quarter of an apple and ate the entire thing including the seeds and ending parts. I said to myself, ‘This entire thing is anointed; I will throw out none of it!’ It was about 11pm at night at The SCOAN, and I had to wake up at 4am to return home as I had been there for a week already.

It was at that moment when I woke up that I knew I was delivered! I just knew I was freed from SIBO! Since returning home, I am free!!! I longer worry of what I should or should not be eating. I am completely delivered and healed from SIBO and the intense painful bowel movements that accompanied it. Oh thank You God! Thank you SCOAN. Thank you TB Joshua! Thank you workers and servants of the SCOAN!

My advice to all is this – don’t lose heart, keep your faith. God is aware of your life; He knows your name and everything about you. You are not lost or forgotten by Him. God can use any foolish thing to strengthen and condition you to further your relationship with Him and to prepare or promote you!”