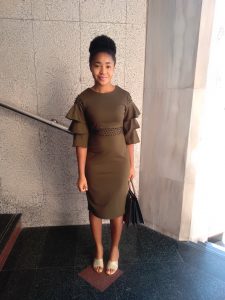 “Emmanuel! My names are Mary Osose Abhulimhen and my testimony goes like this: Two years ago, late in 2017, I started experiencing pain in my left breast. I didn’t pay much attention to it because I thought it was just because of my menstruation cycle but in early 2018, it became much worse. My left breast became so heavy and I would feel something bite me on the inside. Whenever it bit me, I would shout out in pain. At this time, the biting pain became constant to the extent that when I was in a crowded place where someone could hit me, I would have to guard my left breast from being hit. Even just breathing in became a big problem for me; I would be choking.

“I checked on the internet what could be the cause of this pain and all indication pointed to cancer but I refused to go to the hospital for a test because I was afraid to be told I had cancer. I also didn’t have money for any prescribed treatment! In March last year, I was watching Emmanuel TV when the man of God was offering Mass Prayer. I prayed with, touching the screen of my desktop computer in my office at work. It happened that as Prophet T.B. Joshua was praying for viewers, I touched my screen and suddenly, I felt something move out of my left breast! Immediately the pain and heaviness disappeared! I touched and even pressed the breast but there was no pain. Till now there is no pain! Hallelujah! This was how the Lord healed me through Emmanuel TV. Glory to be to God in the highest! Amen!”

Join Prophet T.B. Joshua in prayer and receive your own touch from Jesus Christ today: