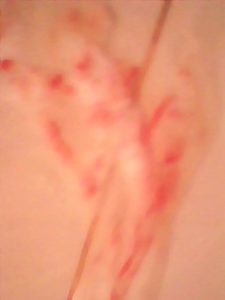 “Good morning. I am Mokgweetsi Fredric Montsho from Botswana and I was healed through Emmanuel TV – because distance is NOT a barrier. I was in my village at my twin’s brother’s house, who is against Christianity. However, in their decoder, they have Emmanuel TV. So, whenever he is not around, I would sneak and watch Emmanuel TV. Since 2008, I have been using a pair of crutches because of the problem of lumbar spondylosis.

“However, it was on that fateful day of 7th November 2018 at around 3pm, Racine preached a sermon in which he shared his testimony about how he came to The SCOAN. When he was preaching, I heard a voice telling me I would be healed that day! Some hours later, during the Mass Prayer, people started to come out and vomit poisonous substances! When I was near the television, a small voice prompted me to kneel down and I began vomiting blood for about 15 minutes! Since that wonderful day, I have never walked with crutches! Thank You, Jesus Christ!!!”

Hallelujah! Here is the message Racine preached that day: