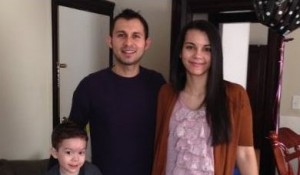 HOW I OVERCAME DEPRESSION!!!

HOW I OVERCAME DEPRESSION!!!

Rebeca Garcia-Escobar from USA shares a touching testimony of how she broke free from the fatiguing grip of depression after encountering Emmanuel TV:

“For many years, since I was a teenager, I struggled with loneliness and depression. This affected me because no matter where or who I was with or the blessings that surrounded me, any little problem that I’d have would remind me of how alone, unappreciated and unloved I was and would put me in a state of anger or depression.

“For as long as I could remember, I would spend many hours a day crying and feeling sorry for myself. I was so miserable all the time that I became aggressive with my husband and my small children. Afterwards I would come to my senses and say, ‘Why did I say or do those things?’ I especially felt worse when I would be angry at my little children and then realise that they’re just babies and I should be gentle with them.

“During both my pregnancies in 2009 and 2011, I had so many conflicts at home that I spent most of my time crying alone and swallowing my tears. Since I got married, my depression became so bad such that there were many times that I spent days lying on the couch without any desire to care for myself or even my children’s basic needs.

“It was so hard for me to care for my children or my husband that my family suffered a lot because of the state I was in. Instead of finding comfort in my local church, they would criticise me when they didn’t see me for many days. This discouraged me even more but God’s mercy sustained me.

“I never saw a doctor for help because nowadays doctors solve everything with drugs and i didn’t want that. However, one day I stumbled across a video of Prophet T.B. Joshua on YouTube. After watching Emmanuel TV, though inconsistently at first, I knew that my problem was spiritual and only God could deliver me. At the end of 2013, I began watching Emmanuel TV with great devotion. I began actually listening to the teachings and the messages began to strengthen my faith and encourage me.

“By December 2013 I was convinced that I could not give up until I visited SCOAN to receive deliverance. To the glory of God I was able to come and visit in February 2014. Prior to going to the SCOAN, I had a lot of opposition at home and the enemy would bombard me with negative thoughts that I was wasting my time and money, that I would not be delivered but come back the same. I fought against those thoughts even during my stay at SCOAN.

“To the glory of God on Sunday February 23rd 2014, Jesus Christ delivered me through one of the wise men from that evil spirit that made me and my family miserable. I then met with the man of God who gave me Anointing Water as well as Anointing Stickers in both Spanish and English.

“Ever since I returned home, I have never again felt depression or loneliness! My attitude towards my husband and children improved drastically. Whereas before I had no control over how I felt or acted, now – no matter what problem I may have – nothing and no one can take away the immense peace and joy in my heart. In fact I am pregnant with my third child and though I continue to have some challenges, I trust in God and the peace in my heart is unshakeable. Glory to God!!! I am so grateful to Him.”