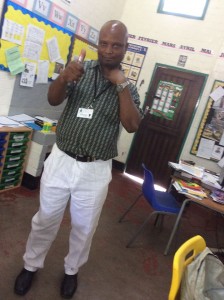 “I discovered Emmanuel TV when I was visiting a friend of mine. I was accompanied by my wife. While sitting in our host lounge, he tuned to Emmanuel TV. What I saw touched her lives forever. On the screen was this lady with an overdue pregnancy. When the prophet prayed for her, she delivered right in church! I have never seen such a thing nor heard about it. I asked myself, ‘Who is this man?’ That is why I took keen interest in finding out more. In short, I discovered the true meaning of what a Christian is.

“I saw giving in humility and thanking the recipients – this was a novelty, a new thing for me. I saw the power of the prophetic word, the healing of HIV/ AIDS and testimonies proving that nothing is impossible with God. ‘Touch the screen and receive’ – that is what my family has been doing since then. What are the changes? Number one – I was drinking too much beer but now, I have stopped! I used to have a lot of marital disputes for no apparent reasons but I am now living happily with my dear wife. I have been promoted in my workplace and even recently bought a vehicle thanks to the prayers with the man of God. I don’t deserve all these; it is only by the grace of God! To everyone I would say, keep watching Emmanuel TV and your life will never be the same. Good morning!