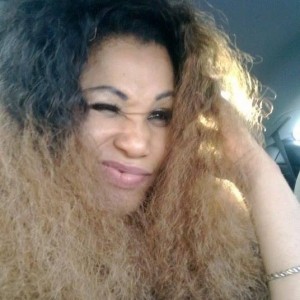 Chioma from Nigeria describes how God rescued her from a brothel through the medium of the Anointing Water.

“I have to confess that I lived a life of immorality in different forms. I had the problem of a fatty liver which I developed due to my alcohol abuse. I could easily finish a bottle of whiskey in a day. I clubbed, was a prostitute and lived a bad life. Even when I knew the condition of my health – that I was dying – I just could not stop! A friend introduced me to smoking marijuana, deceiving me that it would help me to quit alcohol.

“I started smoking but I didn’t really know how to go about it and started swallowing the smoke each time. I started noticing a sharp pain in my chest and serious headaches but I still continued until the day I saw death face to face. That fateful day I was smoking and started feeling uncomfortable. I suddenly felt this breakage in my liver and my breathing became slow.

“All I could think of was the empty bottle of Anointing Water someone had given me from The SCOAN that was in my bag. Before this time, I had been watching Emmanuel TV testimonies on YouTube and kept crying out to God to arrest me. I managed to rush to my bag and get the bottle. There was no water inside but I managed to squeeze a tiny drop of water from the pipe and started praying, ‘God of T.B. Joshua, help me!’ I knew I was dying.

“I ran outside and people were watching me as I knelt down, held up the empty bottle of Anointing Water and shouted out, ‘God of Prophet T.B. Joshua, save the life of a prostitute like me so that people will see Your mighty work in my life!’ Immediately, death was quenched!

“I felt this huge shadow suddenly leave me and I was instantly uncomfortable in the house of prostitution. I told my fellow prostitutes that God does not want us to live the life we were living and I packed my bags. I know something bigger was controlling me. I left the brothel back to my parents house where I am now serving the Lord in truth and in Spirit.

“I prayed along with Prophet T.B. Joshua on Emmanuel TV and decided to go for a scan on my liver shortly afterwards. To the glory of God, my liver is now normal! They could not find any liver disease whatsoever in my liver – the fatty liver is gone. Apart from my healing, I have now stopped drinking alcohol, smoking marijuana and living an immoral life. Praise the God of T.B. Joshua!”