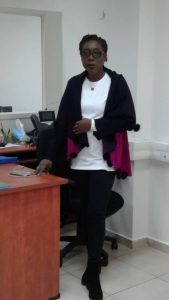 INCREDIBLE BREAKTHROUGH AFTER VISITING THE SCOAN!!!

INCREDIBLE BREAKTHROUGH AFTER VISITING THE SCOAN!!!

“Good morning! Indeed, the Lord Jesus Christ is wonderful – especially when we decide to walk according to His Word. I discovered Emmanuel TV during the time of Ebola when I was working in Liberia as a United Nations volunteer. I got to understand a lot about the Word of God through Emmanuel TV. To tell the truth, I cannot count the blessings I have received through this channel! The Man of God, Prophet T.B. Joshua, says that everything happens for a good purpose – to bring us closer to God, which is definitely the case in my life.

“I finished my volunteer contract in March 2016 and stayed for two and a half years without a job, despite submitting hundreds of applications! It was a very difficult time but I put my trust in God and continued watching Emmanuel TV. The teachings helped me to forgive, forget and move forward with God. Although it was difficult, it was a very fruitful time for me because God modelled me as clay, changed my understanding and my faith really grew up.

“In February 2018, my closest friend Marie Madeleine decided to pay for my trip to The SCOAN! I attended the 18 February 2018 service and just by entering the Arena of Liberty, I had the faith that God had set me free. I left Nigeria the following day by road and reached my country Côte d’Ivoire on the 20th.

“Just two weeks later, my daughter was given a wonderful job. The same month I heard about a vacant post at the Embassy of the Republic of Liberia for which I sent my application. I was contacted on the 19th March for an interview and attended the interview on the 21st. Before even starting, the interviewer told me I had been given the job and should wait to meet the Ambassador, which I did. The Ambassador asked me if I could start work that week – to help in the preparation of their New President visit to Côte d’Ivoire. So, I started working as a secretary/special assistant to the Ambassador!

“One year ago when I went to The SCOAN, I was very poor, jobless and finding it difficult sometimes to feed my four children. Today, God has made me somebody according to His will! Since January 15th 2019, I am in Jerusalem! God has even given me the opportunity to sponsor others to visit The SCOAN. I believe that the whole world should know that God is alive and real – just as we read about in the Bible. My plan is to visit The SCOAN soon to share my full testimony. Jesus is alive! I know the best is yet to come.”

Thank You, Jesus Christ! A million thanks are not enough…