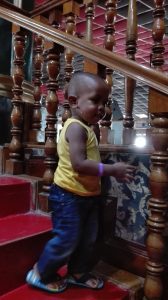 “My name is Likondwa Phiri from Malawi. The problem that brought me to The SCOAN  was my son Mayankho Mwanangwa Chiipanthenga who was afflicted with asthma. On 11th February, we had an opportunity to be on the prayer line and received prayer from the man of God.

“When we got back home, I had a dream where I saw a certain woman suggest my son should be put in a coffin. When I did, the man of God appeared and ordered me to take the baby out from the coffin!
Immediately I woke up and my son started vomiting poisonous substances (I attached the picture)! He was vomiting for some time but ever since then, he has been completely healed from asthma!

“With the asthma, he could not breathe properly. It was difficult for him to sleep, especially when it’s cold. He used to snore but now all is gone and he is just fine. He can sleep peacefully without any problem! Emmanuel!!!”