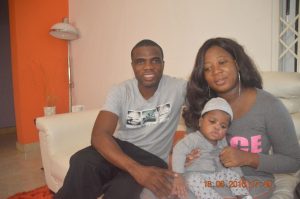 A BEAUTIFUL BABY GIRL AFTER 9 YEARS OF BARRENNESS

A BEAUTIFUL BABY GIRL AFTER 9 YEARS OF BARRENNESS

Mr & Mrs George Gabla from Ghana were remarkably blessed with the fruit of the womb after discovering Emmanuel TV. Be blessed by their testimony:

“My name is George Gabla and I am married to Awoenam Aidam-Gabla. I really want to share our testimony on how the Good Lord has blessed us with a baby girl after nine years of marriage without a child.

I have been charged by the Holy Spirit to share the testimony immediately after I had an encounter in my dream with Prophet TB Joshua last night. We got married in 2007 with high hopes of starting a family. Six months into the marriage, my wife had a fibroid, which was removed through a medical operation. Afterwards, becoming pregnant became a challenge. We went to one of the best gynaecologists in Ghana but there was still no result, after even IVF treatment. We still believed God for a child as the months went by. My wife suggested an adoption but I believed God wanted me to have my own child first.

We started having issues in the marriage that our pastor had to settle until the time I decided to quit the marriage. On that day, my wife decided to confess that she was the major cause of the confusion. Our pastor pleaded with me not to end the marriage. Based on respect for him, I decided to accept the apology. This was the beginning of the spiritual battle in our lives for the next 7 years.

The battle continued daily. Every night, my wife would have an attack and I would have to call our pastor to pray and deliver her. On two occasions she had gone mad in the house. This made me take the Word of God more seriously. I began to disconnect myself from worldly desires. I used to love partying and hanging out with friends. The spiritual battles really ordered my steps. Every night was a night of prayer in my house to the extent that the neighbours got to know me as a man of prayer. I was no longer ashamed of the Gospel.

So the battle continued until one day, I visited an apostle who gave me a CD claiming that there is a fake man of God called Prophet TB Joshua. I watched the CD and strongly believed that those talking in the video were lying, strongly due to their eye contact. This prompted me to research Prophet TB Joshua myself. After watching most of his teachings, healing, deliverance and the humanitarian activities, I said to myself “If this man of God is fake, then I prefer his God. Mine is rather fake!”. What they meant for evil, God meant for good for my life. This was the beginning of my breakthrough. After every church service, I would drive home immediately to watch Prophet TB Joshua preach and also participate in the Mass Prayer. I had been diagnosed with low sperm count and my wife with hormonal issues. As she tried to always talk about hospitals and drugs, I was sure this was a spiritual problem, needing a spiritual solution.

I received the Morning Water from The SCOAN Ghana branch and ministered it in faith. I started encountering Prophet TB Joshua in my dreams. I persisted and got the chance to travel with my wife to The SCOAN in Lagos. We were prayed for and my wife manifested after man of God touched her. The demon said the very things that for over 7 years have been denied by those close to me. This time it was live on camera and the whole family witnessed it. I thank God for this ministry. Since many of the people believed in Prophet TB Joshua’s ministry, they started believing my claims.

The attacks became the thing of the past and my wife finally delivered a lovely baby by name Yeholi (meaning Yahweh Lives, Emmanuel!!!). The baby is now 6months old to the Glory of God. As the Bible says when you are set free, your household is also free. My junior sister also delivered her baby boy a month ago after 15 years of barrenness. I cannot pay God in anyway than to say thank you Father and will ensure that as for me and my household, we shall dwell in the house of God, forever and ever. My appreciation also goes to the Senior Prophet TB Joshua and the ministry of Emmanuel TV. God bless you all.