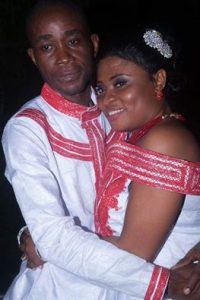 She gets engaged, begins to prepare for her wedding, then a few months to the day, the event is called off, strangely. It was a recurring pattern Ms Gertrude knew had to stop. She took a hold of the Morning Water and prayed. Hear what happened next.

”Men come to me and propose marriage. But few months to the wedding, they call it off. This happened thrice. It came to a point that friends began to use my name whenever they gave examples of people who had survived several disappointments. It was very humiliating. When the second case happened, I had to change my job because I could not put up with the shame. Even my parents and family thought I was cursed. I met another man in April 2016. He proposed to me, saying we should get married June 2016. We had barely started planning, when we began to have issues. I knew clearly that there was a problem and that I needed God’s intervention. I sent a prayer request to the Emmanuel TV team, desiring God’s hand upon my life. I held on to 1 Peter 5: 10. I prayed with the scripture and used the Morning Water my dad brought from the Synagogue, Church Of All Nations (SCOAN). Thereafter, my fiance told me: “I can’t wait to make you my wife.” He could not sit still; he was so restless until July 28, 2016 when he made me his wife. Today, my name has changed from Ms Gertrude Meyer to Mrs. Gertrude Vandy. I give God all the glory! Emmanuel!”