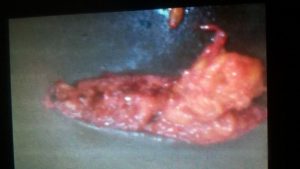 “Good morning! My name is Grace Edeh. On April 14 2015, I was involved in a terrible accident. A long sharp metal, extruding from a truck, struck me at my rear as I faced my car to shut its driver’s door. It pierced the left side of my butt, nearly touching the left hip bone. Dragging me on that part of my body, it flung me over 100 meters from my initial position, leaving blood and glutenous fat splattered across the road and bringing traffic to a temporary halt.
I was immediately rushed to a nearby clinic where I was stitched. By God’s grace, I had Morning Water from The SCOAN with me and I immediately ministered it to the area. I regularly praying with the Morning Water, pre and post dressing and also prayed with Prophet TB Joshua on Emmanuel TV.

“On the second week after the incident, during a routine dressing of the wound, one of the nurses at the clinic asked why I returned rather early for the dressing. Her question puzzled me as I was due for my routine dressing and had not been dressed prior. So, I asked what the concern was and she replied that the wound was so neat like it had been dressed already! That was just the beginning of my testimonies! The following week, a different nurse on duty, soon after commencing to change my dressing, stopped and began dancing and praising the Lord! She was in awe as she saw how rapidly the wound had healed! By the fourth week, the wound had totally sealed up. The hospital staff were astounded!! One of the nurses accosted me on a certain day and asked ‘Excuse me madam but what powers did you use to get yourself healed of this wound. The part of the body where you sustained this injury doesn’t heal easily and for most people in the same situation, this degenerates into cancer of a bad kind!” I stood speechless for a while, wondering what she meant by “what powers?’. ‘Well’, I replied her, ‘that it is the power of Jesus Christ that healed me!’

“Over the years, this miracle has translated from miracle to miracle. God has healed me of cancer which caused an abscess on my left breast, healed my lungs of obstructive disease which made breathing when sleeping at night difficult, provided means for I and my family to relocate and comfortably settle in Canada, debt free!!! The list is endless and the best is yet to come! I am indeed among the redeemed of the Lord! Emmanuel!!!”