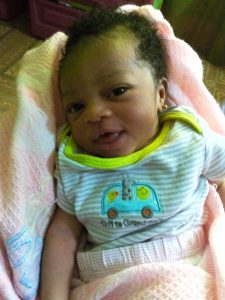 “Make sure you take it along as you go to the hospital,” her mother told her. Shortly after, the pregnant daughter put to bed a bouncing baby girl. What special thing could mama have been talking about?

Cynthia Chidubem Onyia made this startling discovery when she delivered a bouncing baby girl recently. “Make sure you take it with you as you go to the hospital,” mother had told the expectant woman.

The Sticker had been kept far away. She wasn’t convinced it meant much. With the advice, however, she decided to please mama. “I said to myself, ‘Okay, okay, let me just obey her, though I don’t really have any belief in it’,” she confessed. Little did Cynthia know she was signing up for a miracle.

It was the evening of her expected delivery date. Despite the big bulge, she had managed to perform her chores. At some point, she felt “a little sign of labour”. The inkling was soon blown off by uncertainty. “All the same, I thought, ‘By the grace of God, I will surely put to bed tomorrow’.”

Tired, Cynthia rested on the bed. She picked up the Sticker from beside the pillow. Only a minute ago, it had lived in a dark drawer. She examined it. She turned it and looked at the underside. Again, she turned it and read the inscription: “B-R-E-T-H-R-E-N  G-O-O-D  M-O-R-N-I-N-G  L-E-T  L-O-V-E  L-E-A-D.” She dropped her eyes on the picture of the Man of God, Prophet T.B. Joshua. “It doesn’t even say much,” she thought, wondering why mother thinks the bill is a must-have for every woman approaching labour.

“Then I placed it on my stomach. Immediately, instantly, the baby in my womb started turning round about continuously and migrated into a progressive contraction! All these things started around a few minutes to 10 p.m. By the time I got into the car, the contraction was so intense; I thought I was going to deliver the baby in the vehicle!”

Cynthia arrived at the hospital in Enugu State, Nigeria, a few minutes to 11 p.m., and was rushed straightaway to the delivery room. “Hold on! Don’t push! Let me get my gloves!” the female doctor attending to her pleaded. From a paper box containing several, she pulled out a pair of the latex disposables and slipped then on. “P-U-S-H!” the doctor said. She never had to repeat the word again. “Immediately, with one push,” the baby came out!” said an excited Cynthia.

But something else wouldn’t come out. “The doctor and the midwives tried all they could to bring out the placenta. Nothing worked. They administered various medications. All proved abortive. Finally, they became despondent. I heard them saying, ‘Oh no! What kind of a temptation is this? What kind of evil is this?’ But I was not scared. My faith dug in. In fact, I was laughing at the devil.”

She had seen it work the first time. It certainly would work again. “Please, tell my husband to bring in the Morning Sticker,” Cynthia told the Doctor.

“Immediately the sticker was brought into the delivery room, I placed it at my bedside. Then I commanded the placenta to come out in the name of Jesus. The doctor stood at a corner. She was contemplating the next line of action, whether to make one more effort or wheel me into the theatre for a surgery. When she saw that I had begun to pray, she keyed into my faith. She stood up, came to me and pulled out the placental!”

Thankful for the victory, Cynthia gave “all the glory to the God of Prophet T.B. Joshua.”