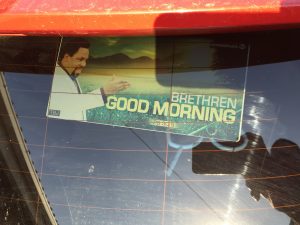 “I Cannot Count ALL The Miracles…” – LIFE-CHANGING TESTIMONY

“I Cannot Count ALL The Miracles…” – LIFE-CHANGING TESTIMONY

No words can adequately describe the transformation in Vuma’s life since God directed him to Emmanuel TV. In the words of the South African, “My testimony is long overdue…” Be blessed as you share his joy:

“Greetings in Jesus’ name! Emmanuel! My testimony is long overdue… I would like to thank God for the man of God, Prophet TB Joshua, and all the prayer warriors in Jesus’ name. I had been experiencing too much delay in my life and family with my siblings to a point where my efforts and career were made a mockery of in my industry. The business I had started was not moving forward – I couldn’t even see what my career was generating. There was nothing to show, though I had always maintained that I was not under pressure. Because of what I was going through, I sought for help from all the wrong places and people such as spiritualists and traditional healers. All those decisions and things proved futile!

In 2013, I was looking for prayer on the internet I stumbled upon Prophet TB Joshua’s prayer video and right there I started praying with him through YouTube. I did more research and even installed Emmanuel TV – as I was praying constantly over a few weeks. A person I knew had the opportunity to visit The SCOAN and whilst going through Facebook, I noticed that he was in Nigeria. I asked him where he was and he told me he was in The SCOAN. When he landed back in South Africa, he sent me the Anointing Water and Anointing Stickers.

People of God, I prayed and that same night, the man of God came in the dream and spoke to me that all is well! The miracles in my life that have happened since then – I cannot count all of them! Business breakthrough! Contracts I never thought I would do before! God then gave me a car – a Mercedes Benz A250 in 2014. In the same year, I did my duties as a man and got engaged and was able to pay all the dowries. In the same year, I demolished my old family home, a 4 roomed house in the township, and built a new home twice the size of the old one! In 2015, God gave me another Mercedes Benz – an A45 AMG which is twice the price and power of the other! As if that was not enough, I was able to also support my fiancé with a brand new Golf GTI which also came as a big miracle! Even those who know me were surprised!

People of God, I arranged for my younger brother who was a very, very bad boy to come to The SCOAN. I had been crying for over 15years because of him but after he visited The SCOAN, he has never made us cry ever since! No more drinking alcohol; he doesn’t smoke and do all sorts of bad things at All in Jesus name. Also, he was given a temporal job before going to Synagogue – the job was meant to be for 3weeks – but seven months later, he is still working! I thank God for my family, for Prophet TB Joshua and everyone at The SCOAN, in Jesus’ name!”

Perhaps you are facing a similar situation? Be encouraged to pray along with Prophet T.B. Joshua on Emmanuel TV and get ready to experience your own season of breakthrough, in Jesus’ name!