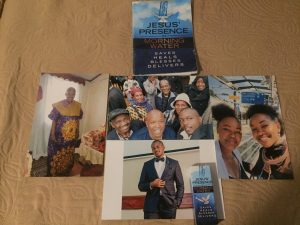 “Emmanuel!!! Kindly allow me to share my testimony to the glory and honour of God, for His intervention in my family. I’m a Kenyan living in France. Last year, I found myself in a cage of despair, failure, rejection, poverty, sickness and hopelessness. This was equally the case for my family back in Kenya many miles away from me. The intensity of these adversities led from one event to another – looking for solution. Earlier last year in 2018, I started doing an IT course but a few months down the line, I had to quit. Alternatively, I thought finding a job would be easy. Despite sending out multiple applications in search of any job, it all was in vain.

“Despite the communication with my family, I didn’t explain to them how difficult it was for me. At the same time I learned that my mum was sick but she hid it from me. As I prayed, I started having visions of my mum in her last moments of life. My despair and hopelessness grew in depth until one evening I came across an Emmanuel TV event in Paris, France on Facebook. The event was taking place that weekend. Before this, I had never heard of Emmanuel TV or Prophet T.B. Joshua. I tried to ignore but my eyes were glued to the announcement.

“That Friday while going to sleep, I asked God to show me if I should attend the Emmanuel TV seminar the next day or not. That night, I had a dream and I saw a man in a white robe stretching his hand towards me. I woke up convinced that I had to attend the seminar! Upon arrival at the venue, I saw the banner of Emmanuel TV and the face of Prophet TB Joshua struck me. This was the same face of the man that I had seen in the dream with a white robe!!! This was my first encounter with Emmanuel TV and I came back joyful after my deliverance. I could sleep peacefully without nightmares after the Morning Water was ministered to me at the event!

“Four months later, in the month of June I made a visit to The SCOAN because I felt a deep need to stand in the gap for my family for deliverance and healing. I had received news that my elder brother was in depression and he had locked himself in his house, languishing in ulcers and frequent headaches. He didn’t want to serve anymore in church or relate to any member of our family. My mother too was unwell and her condition deteriorated more and more. I made copies of their photos and in faith, I believed that God will locate us.

“My one-week stay at The SCOAN was breathtaking. That Sunday, when the Prophet came to lay his hand on me, I felt an electric wave in my head for an hour! I laid the photos on this anointing and believed with the man of God that healing and deliverance were taking place in my family! Returning back to France, I ministered the Morning Water on myself and on my family’s photos. In the morning I woke up having a diarrhoea which lasted for two days. Afterwards, I felt relieved and incredibly, the same thing happened to my mum back in Kenya! Three days later, my brother reached out to me for the first time in 6 months!

“My other brother had issues with his house and was at the verge of losing it to some woman. With a court case running for 4 years, the Lord intervened and restored it to him. My own case didn’t escape the anointing; I took another course and passed my examinations. The Lord blessed me with a job in one of the best hospitality companies. I give God all the glory and honour and for locating us which we least deserve! My family and I have been positioned for healing, deliverance and blessings through His mercies!

“I also want to encourage everyone that the challenges they find themselves in are just stepping intervals for a new dawn. God of Prophet TB Joshua – thank You! Emmanuel! As my Prophet says, ‘Better is not good enough; the best is yet to come!’ I’m so humbled!!! Joy from France.”