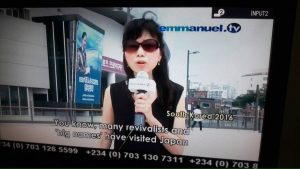 My Friend Was Healed At TB Joshua’s Korea Crusade!!!

My Friend Was Healed At TB Joshua’s Korea Crusade!!!

“Emmanuel!!! I’m Akiko YAMAMOTO from Japan. I attended Prophet T.B. Joshua’s crusade in Korea in July 2016 with some friends. One of them, Mr Okada, had been suffering from severe symptoms of Lumber spinal Canal Stenosis. He had to leave work for three months and stayed in bed because of the pain and numbness associated with LCS. On the second day of the crusade, we were on the prayer line but just before us, the man of God stopped his prayer for people because of time and just continued to Mass Prayer. He seemed to be so disappointed but I encouraged him to remove the lumbar corset and run! To the glory of God, during the Mass Prayer, he started running!

“After the crusade, we prayed with him by ministering the Morning Water and he then vomited. He was completely healed!!! Since that day, he never complained of the symptoms associated with LCS. Praise the Lord! We really want the man of God to come to Japan so that more Japanese can be saved! People say Japanese are the most difficult to be saved in the world but I believe that God is able and He has a special purpose for the Japanese. May God speak to us through Prophet TB Joshua and revival will come to Japan soon! Thank You, Jesus!!!