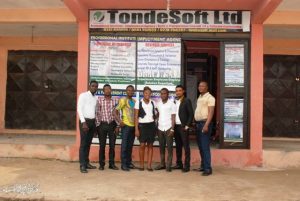 Once, he was barely able to feed himself, let alone provide for his family. Arho Tonde Alfred Kojovi, however, persisted in prayer. With use of the Morning Water, and prayers on Emmanuel TV, he testifies to the transformation you are about to read.

”I am a 33-year-old Ghanaian, who grew up and schooled in the Republic of Benin. I returned to Ghana in 2007 where I planned to settle. Making a living, however, became difficult. I took up teaching in 2008 to 2012, but was barely able to feed myself, much less feed my family.

In January 2013, I bought and installed a digital decoder, after which I came across Emmanuel TV. I began to watch it regularly. I was also participating in the prayers. I was inspired by the Holy Spirit to change my career. Since I had an ICT background, I turned in that direction. I began to go to schools and stores, selling basic software systems I developed. These were simple database solutions that could help users convert paper work into electronic systems for ease and accuracy.

For more than two years, I trudged under the sun and rain seeking a viable market for my products, to no avail. Besides, I operated the business from home because I didn’t have money to set up an office. But with persistent prayers, things began to change. I met a Nigerian who gave me the Morning Water. One night, I saw the Man of God, Prophet T. B. Joshua  taking me through a deliverance process. I continued to pray along with Emmanuel TV.

In October 2015, I decided to set up a physical office, hoping to add other services to the ICT business. But I didn’t have enough money. I could only pay a year’s rent. Store owners wanted four to 10 years! By faith, I approached a store owner with the little money I had, recalling how people faced with similar problems had testified to God’s intervention on Emmanuel TV. To God be the glory! I got a very big store. The owner accepted the money I had as rent advance.

Since then, money began to flow in. I was able to furnish the store and add other business services. Currently, I run a training centre, a recruitment agency, IT/software services, and audit/accounting services from the same office, and have a total of eight staff!

No one believed a poor and helpless person like me could set up such a business – TondeSoft Ltd in Kasoa, in the Central Region of Ghana. I am grateful to our Lord Jesus Christ, His humble servant, Prophet T. B. Joshua, and Emmanuel TV. Thank You, Jesus!”