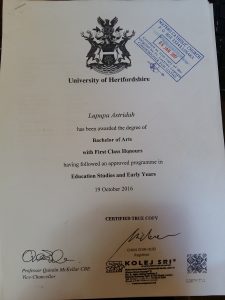 A wrong information sent to the university authorities meant she wouldn’t be allowed to sit for her final examinations. Her years of study would be lost, except “the God of Prophet T. B. Joshua” intervenes. Would He?

It wasn’t the sort of news any student wanted. “I cried all day,” said Astridah Lupupa. “I was so devastated. I had finished all my course work. The only thing that remained was write the final exams.”

But there would be no examinations; none whatsoever for the Zambian studying in Malaysia. Two weeks before the ultimate assessment, the shocker hit. She had eyed a Bachelor of Arts degree, to be awarded by the University of Hertfordshire in the United Kingdom. Suddenly, the institution found she might have started in futility.

Based on information it received about Astridah’s programme, the British academy submitted: “The aforementioned student is ineligible to write the final examinations.”

Time was ticking. Astridah wrote to the Zambian embassy in Malaysia. She needed help, and urgently too. None came.

The window offered a captivating view of the city. Often, she gleaned inspiration from the hustle and bustle on the streets. She always thought they reflected the resoluteness of life. This afternoon, as she watched cars and trucks hurtle down the highway, she felt different. She felt detached. Perhaps the trouble in her mind had begun to take its toll on her emotions. Astridah pulled the curtains and locked the door. She wanted to be alone. An urge for prayer burned in her soul.

“I took my Morning Sticker and prostrated on the floor. I prayed, saying, ‘God, you can change this decision. With You, everything is possible. Lord, You made a way for me to come here and study; You have the power to change this decision by the university’.”

The following day, her senior lecturer called her on the phone. She, it was, that had drawn Astridah’s study plan. Now, she wanted to make things clearer, having a better understanding of matters than a new lecturer that had taken over.

Four days later, the management held a meeting. Invited, Astridah took along her Faith Bracelet. “There, I was told that I was eligible to sit for the examination!” That was not all, “they also apologised to me, acknowledging that the information passed on to the university had been incorrect.”

This was the sort of news Astridah really wanted to hear. And “right in their presence,” she gave glory to the God of Prophet T. B. Joshua who made a way for her and saved her from the looming disappointment. When the results came out, Astridah jumped up in a a mixture of shock and wonder. It read thus, “Lupupa Astridah has been awarded the degree of Bachelor of Arts with First Class Honours having followed an approved programme in Education Studies and Early Years”.