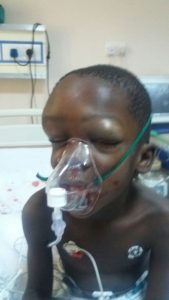 The four-year-old boy was unconscious, having fallen on his face from a multi-storeyed building. He lost a lot of blood, suffered injury to the brain and could not breathe without support. Amid the emergency, two specialists failed to agree on the right procedure needed to save his life. It was a race against time. But prayer delivered the miracle.

On August 25, 2016, a neighbour’s son pushed my four-year-old nephew from a balcony. The boy fell and hit his face on a concrete platform. Immediately, he became unconscious. My sister rushed to the scene and he was was taken to a hospital. By the time he arrived, he had lost a lot of blood. His life was in danger. He was moved to the Intensive Care Unit (ICU) where nurses struggled to stabilise him.

When I received the news, I sent a prayer request to The SCOAN. Scans revealed he had a fractured skull. The situation looked very bad. The oxygen level in the brain was low; there was a danger of brain death. But we kept praying and believing God. As a result of the bleeding in his brain, he could not breathe and had to be assisted by a machine.

He was to be transferred to Nairobi, the capital of Kenya, for specialised care. The doctor that was treating him consulted a neurosurgeon in the city on the way forward. But they could not agree on the step to take. One said there was a need to wait for the boy’s condition to stabilise; the other said the case required urgency and wanted an incision made in his trachea, to aid breathing. The neurosurgeon would not agree; he argued that the procedure would only worsen the boy’s suffering. We were frustrated by their differences. God, however, was working out things for good.

Every morning, when the Man of God, Prophet T. B. Joshua, prays for viewers around the world, I would fetch the boy’s picture, sent to me by my sister, and place it on the TV screen as a point of contact. I would also sprinkle the Morning Water on his picture on my phone, as I prayed.

His eyes were swollen shut. His face was deformed. But we continued to pray with the Prophet. And to the glory of God, my nephew stabilised! Three days after the incident, August 28, 2016, he was removed from ICU to HDU (High Dependency Unit), even while plans to transfer him to Nairobi for surgery were still ongoing.

On September 3, nine days after the fall, he was discharged!

Two days later, he was taken to the specialist for a check up. The doctor simply said, ‘God saved him.’ He said that the boy wouldn’t need any surgery and that the bones would heal as he grew.

The God of Prophet T.B. Joshua set the boy free without surgery! Glory be to God!