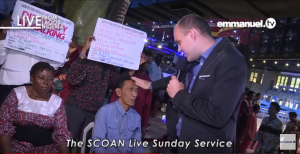 “My name is Jonathan Racpan. I am giving this testimony on behalf of my father because he does not know much about using the internet. My father’s name is Lorenzo Racpan and we are from Philippines.  My father first got a heart problem in 2016 which made it difficult for him to even drink water. He was diagnosed after admission in hospital with a problem with his heart and his prostate.

“Tests on his prostate proved that it was enlarged way above the minimum range and that he could be moving close to cancer if not treated. After a couple of months he ran tests again for his prostate and the results showed that the enlargement was even bigger than the previous one. I could easily see that my father was really scared. So I advised him to watch Emmanuel TV because I used to watch the channel and witness healing, deliverance, blessing and breakthrough happen to all people who believed in Christ Jesus.

“In the first couple of months, my father was not really that interested but later on he was confident enough to come to The SCOAN and receive his Healing. He arrived at The SCOAN in May 2019 and received a touch from Jesus. Instantly, according to my father, he was able to turn his neck which he said used to pain him terribly when turning it. It has now become painless! After the touch at the SCOAN, my  father does not need to take his maintenance medicine for his heart, blood pressure and prostate. He is healed to the glory of God! Thank You, Jesus!!!”