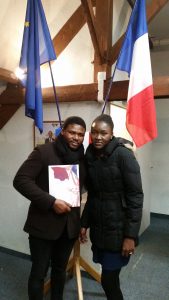 Ele Okaka Helene visited the Synagogue, Church Of All Nations (SCOAN) where she received the Morning Water. The journey marked a turning point in her life.

”I am from Congo-Brazzaville, now a French citizen. I came to study in France in 2008. I finished in 2013 and began to work. For 10 years, I tried unsuccessfully to get a residency permit. The last time I applied, I never even received a response. Also, for 26 years, my uncle failed to relate with our family, not even when we lost our father (his younger brother). My mother had to shoulder the weight of caring for the home. We were beset by diverse challenges, including sickness until I came across Emmanuel TV through my fiance. I began to watch it regularly. I visited the Synagogue, Church Of All Nations (SCOAN) in November 2015, and was lucky to get the Morning Water before returning to France. I ministered the Water every time I prayed. I also used it on the document. My faith was strong when I reapplied. Behold! The response was positive and fast! It was beyond human imagination. Following my return from the SCOAN, I also noticed that my uncle had begun to relate with us better. He has been calling my siblings and I, night and day, asking after our welfare and playing the role of a father. I thank God for His goodness and mercy over my life and my family. Emmanuel!”