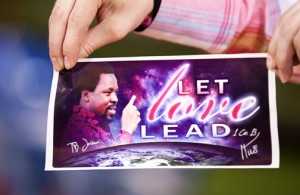 The following testimony comes from a Ghanaian whose faith was put to the test when her young son inexplicably lost consciousness while in hospital for a seemingly routine treatment. Declared clinically dead after several frantic attempts at resuscitation, an Anointing Sticker was suddenly brought by a random onlooker of the tragedy.

“Emmanuel! My name is Loritta Obison and i live in Ghana.I want to thank God for what He did for me through the medium of the Anointing Sticker and praying with Prophet T.B Joshua on Emmanuel TV.

“When my four-month old baby suddenly became ill, I decided to take him to the hospital. The doctor sent us to do a test which revealed that my baby had malaria and we were admitted accordingly. At this time, my baby was not in a critical condition. He was even playing with me and laughing. However, as soon as we got into the room in the hospital where my baby was to be treated, he suddenly turned white and could not move again. In fact, he passed out!

“His tongue and eyes turned white and then he became stiff. Doctors tried to resuscitate him but there was no way. They quickly brought out oxygen and put it on his nose. After further efforts, the doctor turned to me and shook his head. He said my baby was ‘blue’, which is a medical term for a dead baby. Upon seeing this, I burst into tears and began calling on the God of T.B Joshua to come and rescue my son. A woman who was in the same ward and saw me playing with my son outside before the sudden tragedy happened immediately brought out something from her bag upon hearing my desperate prayer and rushed toward me. It was an Anointing Sticker from The SCOAN!!!

“She placed it on my baby’s forehead. What followed next was MIRACULOUS! Colour started flushing back into his cold, blue face. Moments later, his eyes opened and consciousness was regained! He came back to life in that glorious moment! This was a baby that still had an oxygen mask fixed on his face. The doctor had inserted it into his nose for more than 15 minutes without any signs of life but as soon as the Anointing Sticker was placed on him, life returned! After more checks from the astonished doctors, we were finally discharged from the hospital. The miracle amazed everyone there and they glorified the Lord with us. I thank God for not allowing me to leave the hospital with the corpse of my baby but a healthy boy!

“I also have a testimony about Emmanuel TV. I am a graduate who never worked with her certificate since graduation 10 years ago. However, on Sunday, I prayed along with Prophet T.B. Joshua on Emmanuel TV where he said: “I release you from a life of hardship! I release you from a life of failure!” The next day on Monday, I received a call from a big financial institution in Ghana inviting me for a job interview where 250 applicants from all over Ghana were interviewed. Only 12 people were selected and I happened to be one of them. I was offered the position of “Head of Marketing” with a very beautiful salary package, a car and other incentives. Only the God of SCOAN can do this! To God be the glory. Emmanuel!!!