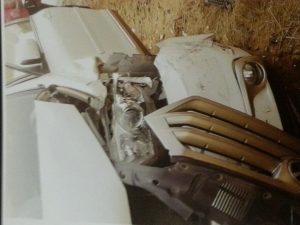 Saved From A Car Accident!

Saved From A Car Accident!

The engine throttled with horsepower. The fuel tank was full. The tyres were good. The luggage had been loaded. Everything seemed set for the journey. But Robert Enechukwu knew better. He wasn’t prepared to take any chances. He got a bottle of the Morning Water and ministered it on the vehicle and its passengers. It proved a wise move.

A Nigerian living in South Africa, Robert visited the Synagogue, Church Of All Nations (SCOAN) during a two-day revival of restoration titled, Your Faith Will Not Fail, December 8 and 9, 2016. At the prayer line, he was attended to by the Man of God, Prophet T. B. Joshua.

Like a charged battery, Robert went in the might of the refreshing he had received, prepared to achieve success in all his endeavours. Satan, however, had other plans.

“After the revival, I traveled to my village in Anambra State. On January 3, 2017, I set off for Ogbomosho in Oyo State, Nigeria, where I have a business interest with a friend.”

As the vehicle raced towards Benin, Edo State, “a motorcyclist was riding dangerously ahead of us. He carried a woman who packed a baby on her back. The man was zigzagging on the road. The passengers and the driver panicked. Suddenly, we heard a loud crash at the rear of the bus we were in. Before we could piece together what had happened, we heard another crash! Then another! And another!”

Terrified commuters dashed here and there. Some screamed, others wailed. After the dust had settled, the damaged remains of four cars and a motorcycle were strewn across the scene of the multiple collision.

Happily, there was no loss of life. Some victims, however, sustained injuries. Testifying, Robert said: “All the vehicles involved in the accident had to be towed away, except one – the bus in which I travelled!” The passengers simply changed a burst tyre and continued with their journey!

“Thanks to the God of Prophet T. B. Joshua for the Morning Water,” said Robert, glad to have escaped the accident unhurt.