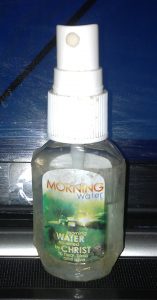 Tinoteda Mudingwa knew the dream of completing her education could be cut short. Her mother was a single parent and the school fees were not forthcoming. But they had faith, and they put it to work. Of course, a miracle followed.

A 15 year-old Grade Ten student in South Africa, Tinoteda needed much more that the little her mother struggled to provide, if she had to graduate from school. Such was the burden in her heart. When in December 2015 she had opportunity to visit the Synagogue Church of All Nations (SCOAN) there was just one request on her lips. “My only prayer was to be awarded a scholarship, to make my mother’s life easier and give me peace of mind to finish my education,” she said.

Following the visit, she persisted in prayer, using the Morning Water and watching Emmanuel TV. During the broadcasts, sometimes, she saw children receiving scholarships, wondering when her time would come.

On October 26, 2016, “My mother went back to the school to ask about the scholarship. This time, she was given forms and asked to apply again,” she said.

Prayed up, Egines and her daughter did something they had never done. “We filled the forms, prayed over them and sprayed them with the Morning Water. Then we handed them in the following day,” she said.

The mother received a cheering news: her daughter’s outstanding fees for the year would be paid by the school!

“I will like to give God the glory for answering my prayer request,” said a happy Tinoteda, believing “that my fees for the remaining years of my education would be paid through the grace of God.”