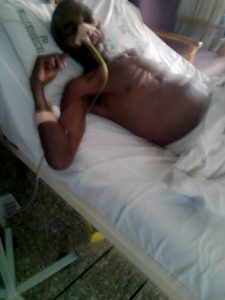 Anxious about his sick father’s worsening condition, a son discovers that healing is just one prayer request away.

Simon Ayitey had precise expectations when he brought his father, Kofi, to the hospital. He hoped the man would receive adequate care and after a few days bounce back to health. He was wrong.

The nurses, day after day, poured dosages into the infirm body. His son shuttled between home and hospital, and with sleepy eyes watched for hours at the invalid’s bedside. “Despite being at the health facility, his condition worsened,” said Simon.

Papa had been unable to empty his bowels. It seemed like a storm that would cease after a day or two. But this was no ordinary storm. This was a tempest with an unmistakable mission: snatch the ailing father away forever.

Seven days rolled by. Then came another seven. Soon, Simon was watching distraughtly as weeks flew past. He became even more alarmed as his father began to “vomit everything that went into his stomach.”

The situation “was getting out of hand.” On January 5, 2017, however, Simon sent a request for prayer to the Synagogue, Church of All Nations (SCOAN). “We are praying for you,” came the reply, encouraging him to have faith in God who could solve all problems.

Did the prayers work? Absolutely!

“I give all thanks to God,” said Simon, barely able to contain his joy, “because my FATHER IS HEALED AND DISCHARGED from the hospital!”