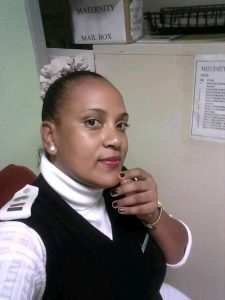 “Emmanuel! My name is Sarah Mosetsanagape Hocker. In 2005, Prophet TB Joshua came to my country of Botswana. I went to the stadium on the last day with my aunt. We were supposed to take my daughter to the clinic because she was very very sick – but my aunt decided that we should take her to the stadium for prayer. During the Mass Prayer, Prophet TB Joshua told the crowd that they should stretch out their hands towards any sick person who is sitting next to them in the stands. I shouted that my daughter is sick! While the man of God was praying, my daughter started vomiting very hot fluid! I was surprised because she spent the whole week without eating or drinking anything despite the fact that I took her to the clinic many times! My clothes and her blankets were soaking wet! After a few minutes, my daughter said, ‘Yes, mummy I am healed! I am now hungry! We all rejoiced and my little daughter danced throughout the evening, singing along with the praise and worship team!

“While Prophet TB Joshua was walking along the stadium, he prophesied that there were people in the stands who are going to go to school in August and that their lives will be changed forever! I claimed that promise because I was unemployed and living in sheer poverty. Although I had no hope of going to school at that time – after the prophecy, I believed! Two weeks after Prophet TB Joshua’s visit to Botswana, I got a job as a cleaner at one company but after a week, I was given a position of a sales lady. My salary was moved from P600.00 to P2500.00! It was a miracle! That year in August, I got a call from the Institute of Health Sciences in Serowe. They told me that my name was in the waiting list and that I should report to school that same day. It was a miracle!!!

“My life changed from there. After three years, I graduated with a distinction in general nursing with two awards – Best in Practice and Best Overall. Two years later I went for midwifery studies where I graduated with a merit and two more awards – Best in Practice and Best Overall. I want to give all the glory and honour to God Almighty! Without Him, I wouldn’t be here today. I want to thank Prophet TB Joshua for allowing God to use him to touch our lives. Amen!”