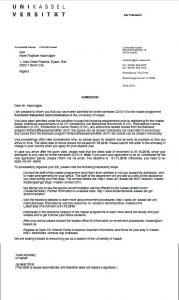 How TB Joshua’s Prophecy Led Me To Germany For My Master’s Study!!!

How TB Joshua’s Prophecy Led Me To Germany For My Master’s Study!!!

Good Morning! My name is Assimagbe Raphael and I am a Nigerian. I am glad to use this medium to share my testimonies and give thanks to God on how He used Prophet T.B. Joshua’s ministry to guide me towards His purpose and plans for my life.

During my first-degree program in my home country, I had nursed the dream to further my studies abroad – to study in a nation like Germany, USA, England or Canada due to their high standard of quality education. During that time, I was privileged to visit The SCOAN for support, prayers and guidance. The Prophet, a father figure, has been a source of inspiration to many youths around the world, which I can say I am privileged to be one among the countless millions. During one of the prophetic services in The SCOAN, I was one of those who received a life-changing prophecy from the Man of God. As he was going about giving out prophecies, he unexpectedly moved towards my direction, stretched his hand towards me and said: “Your destiny has been chained from your mother’s side. There are things you want to do but you can’t do it. You have big plans. There is a journey before you – I see you going to Germany. It is your destiny to be in Germany. It is already written and there is nothing anybody can do about it.”

Prophet T.B. Joshua then lay his hands on me to break the chain, setting me free from every bondage in Jesus’ Mighty Name! I took the prophecy as a confirmation from God as to the country where I would do my master’s degree program. I strongly had the conviction that as far the words were from Prophet T.B. Joshua, it was true, authentic and had heavenly backing. However, brethren, it was not an easy process as there were ups and down. I encountered failure, disappointment and frustration during working towards achieving this dream to do my master’s degree program in Germany. It was so frustrating to the extent that I started doubting if this was indeed the will of God for my life. Nevertheless, I was always praying with the Prophet on Emmanuel TV and listening to the encouraging messages. Despite the rejection letters from several Universities that I applied for and my financial constraints, I was encouraged by the words of the Prophet never to give up. As the prophet said, “When you are connected to your destiny, nothing and nothing can stop you!”

I then reapplied again. Before I sent my application documents to the Universities, I ministered the New Morning water on all my documents. To God be the glory, two University sent me an admission letter – the University of Kiel and the University of Kassel. When I finally got the admission letter from the two Universities, I could not get all the finances needed to get my student’s visa approved because I had spent a lot. At that point in time, it was like all doors were closed. Those whom I put my hope in disappointed me. However, the God who never sleeps nor slumbers did a great thing in my life! The person that God used to assist me financially and even pay for my flight ticket was a total stranger. We had never met in person before! It was a divine arrangement.

I remember one night the Prophet came to my dream. This was during one of my frustrating periods. He came close to where I was sleeping on my bed and he told me that I will surely go to Germany because it was my destiny to go there. That meeting imparted strength in me and today, I am presently a Master student in one of the prestigious University in Germany, Christian-Albrechts-Universität zu Kiel, also known as University of Kiel, studying Economics to the glory of God. I thank God for fulfilling His Words and promises upon my life through His mouthpiece, Prophet T.B. Joshua! Thank You, Jesus Christ!