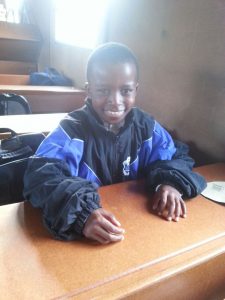 Ruth Pamela Gyinaa, a South African teacher, shared this incredible testimony about one of her students whom God miraculously healed through Emmanuel TV:

“Akhule Ngceni is a South African boy that was in my class last year. He was 9 years old and suffered asthmatic attacks roughly 3 times each day in school. He found school work difficult and was using a nebulizer and inhaler to sustain himself. Almost everyone including his parents gave up and came to accept that this innocent boy would live with this condition forever. I asked him if he believed Jesus can heal him. He agreed that Jesus can heal him. So, I suggested to him to let his mother tune in to channel 390 on their DSTV so he can touch the screen of Emmanuel TV with absolute faith when the man of God, Prophet T.B. Joshua was praying. He did as I suggested and on April 23rd 2018, he touched the screen when the prophet was praying in a replay of an earlier service. It was not even a live service!

“God is great! Akhule came to school on 24th April 2018, ran to me and started shouting: ‘Teacher, teacher – I am healed! I am healed!’ I asked what happened. He narrated that when he touched the screen of Emmanuel TV, he felt something coming up from his stomach, through his throat and his mouth. Suddenly, he rediscovered his voice which had been lost! He was able to speak well again. Since that time till now, he has not suffered any asthmatic attack! It’s almost a year now and his nebulizer and inhaler have been left with me in the school because the mother and Akhule say they no longer need them. I just felt I had to share this wonderful healing to the glory of God. EMMANUEL! Distance is never a barrier. I am in Tsolo, Eastern Cape. I am in the school where I see this wonderful boy each day!”

Are you sick and in need of a touch from Jesus Christ? Join Prophet T.B. Joshua in prayer and believe in God for your healing, in Jesus’ name!