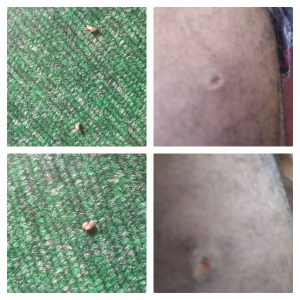 “My name is Raphael Chimezie from Nigeria. I was lying down one night when I suddenly heard something like a ‘gunshot’ and felt something entering my right thigh. As I turned around to know what it was, I heard another shot and this time something hit my left thigh.

“I thought it was just an insect bite and didn’t take it seriously but as the days went by, the section on my legs where it ‘hit’ became more and more painful. Later, they broke out into an open wound and were even more painful. After two weeks without any relief, I realised this must be something else – some kind of spiritual attack.

“I started praying and calling on God for healing. One day, I logged onto YouTube and saw a video pop up where Prophet T.B. Joshua was praying for viewers all over the world. So, I joined him with faith and began praying. I placed my phone on both the sores on my legs as the prayer was being offered! Immediately, two LIVE worms came out of the 2 legs at the same time!!! I repeat – two worms came out of both legs at the same time!! Thank You, Jesus!!! Immediately afterwards, I felt relief. God has healed me!”