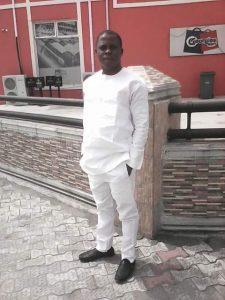 After twenty-four months of persistent pain, a survivor of an armed robbery finds healing in a simple action of faith.

Gunshots rang out, as the daredevils peppered the vehicle with hot bullets. The masked robbers had placed a huge log of wood across the road. The driver swerved frantically. He slammed on the accelerator, sending the bus almost flying through the bush.

When the bus hit the road safely, many metres away from the scene, its horrified passengers realised a female co-traveller had been killed. A few others sustained injuries; and one man, Elijah James Omni, would endure his pain two years after the December 27, 2013 incident.

Seated at the front row, he saw it all. The gunmen in Ebonyi State, Nigeria, had hoped to force the vehicle to a stop. The driver however proved smarter. Elijah’s privileged position on the bus also meant he sustained a peculiar injury. The windshield had shattered as the scary drama ensued, causing the lodgment of tiny fragments of glass in his head.

The torment threw him into a desperate search for a medical solution to no avail. “Without success, I visited some hospitals in order to have the bits removed. One health personnel complained that the pieces were too tiny and so scattered. The big problem I had with the condition was that it caused me serious headache. It made my everyday life miserable for over two years.”

At a crossroads, Elijah, one day, “chose to pray with Senior Prophet T.B. Joshua on Emmanuel TV.” As the Man of God ministered to viewers worldwide, proclaiming distance is not a barrier to receiving a touch of deliverance from Jesus Christ, the afflicted man placed a hand on his head. With the other hand, he touched the screen.

“That very week,” he exclaimed, “one of the pieces was pushed out from the centre of my head. From that day, till today – MORE THAN FIVE MONTHS –  I have never felt any headache!”

Whatever y0ur situation, we encourage you to pray along with Prophet T.B. Joshua and believe God for your own healing, in Jesus’ name: