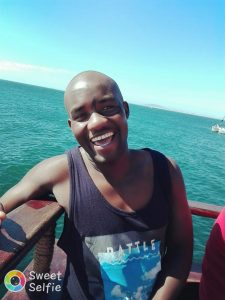 Two Years Of Back Pain Disappear!

Two Years Of Back Pain Disappear!

A Zimbabwean living in South Africa prays along with Prophet T. B. Joshua and is set free from a distressing health challenge. It is another proof that distance is not a barrier whenever the hand of faith stretches to receive a miracle.

It took only a pronouncement by the Man of God, Prophet T. B. Joshua. It didn’t matter the words were broadcast from a location thousands of miles away. Most important was: the utterances rode the airwaves with power and delivered result to Zimbabwean Arnold Joel Israel.

The nagging pain in his back had a worrying history. It had begun like an ordinary discomfort. As months wore on, however, it took on a more terrifying dimension. It sowed fear in Arnold’s heart and threatened to force him away from his job. It also spelled hunger. Worse perhaps.

“I work at a furniture shop where I make things like wardrobes and kitchen units. The task requires bending down often. But at a point, I couldn’t bear the agony anymore. I feared the situation could deteriorate further. I began to think of quitting.”

Then came Sunday, January 1, 2017. Arnold had his attention glued to Emmanuel TV. “I was logged on live for the first time. The Man of God said we should pray for our nations and make confessions to the Almighty. I followed every step. The Prophet declared healing to all who were watching from their homes.”

The words met faith in Arnold. “Since that day,” he testified, “I HAVE BEEN HEALED!”