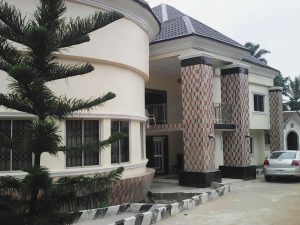 Popularly known as Chief Zebrudaya Alias 4.30, Mr. Chika Okpala tapped into a stream of humour, thrilling millions of Nigerian viewers. Now, decades into his exploits, the comedian discovers an even more potent flow. Happily, he tells the world the many blessings he and his family have received through the ministration of the Morning Water.

The message the young man relayed on the phone was reason enough for Mr. Okpala to be disturbed. Henry Afam, his son, was in the Republic of Belarus, pursuing a Master’s degree in Telecommunication Engineering at the Belarusian State Technological University. Six months into the course, his heart, a vital organ in the body, began to falter. ”See a doctor, immediately,” his father and mother said with anxiety. When Henry called again, the diagnosis he whispered into the phone wasn’t what dad and mum were prepared to hear. CONGENITAL HEART DEFECT!?

Before Henry set out on the journey, Okpala and his wife came to Prophet T. B. Joshua at the Synagogue, Church Of All Nations (SCOAN) ”We wanted to seek the face of God concerning the trip. The Man of God prayed for him and my entire family, and gave us the Morning Water,” said Okpala. But who ever heard of heart problems melting away at the application of water? And did someone just say, ‘That must be plain humour?’ The comedian,  Zebrudaya, doesn’t think so – certainly not with the Morning Water.

Listen to him: ”We asked him to apply the Morning Water to his chest and drink some, every time he prayed. The mother and I also kept praying for him. We also anointed his picture. Henry did as we instructed. Behold, after two weeks, he was discharged from the hospital without undergoing a proposed heart surgery! He was okay throughout the 18-month course! Besides, less than a month after he returned to Nigeria, he was employed by the National Universities Commission Abuja!”

If it worked so well for Henry, why shouldn’t it for Okpala’s only daughter, Anita Ogechukwu Okpala, ”who is very prayerful with the Morning Water”? He shares her testimony: ”Following her participation in the National Youth Service Corps, two weeks later, she was employed by the Tertiary Education Trust Fund Abuja! Again, less than a year after that, she married.” It worked too for his ”dear wife, Omunuzua Christiana Okpala, a prayer warrior who is always with the Morning Water. She gained an employment at the Federal Ministry of Education after several attempts!”

Now, it’s time to hear from the father’s mouth. ”In my own case,” began Okpala, ”it’s been miracle galore all the way. I never skip using the Morning Water during my prayers. These are some of the results: first, I was made an ambassador to the National Open University of Nigeria and awarded a grant to pursue a Master’s degree in Business Administration in 2014. This is in addition to a Master’s degree in Mass Communication, which I obtained from the Enugu State University of Science and Technology. Second, I was appointed a ‘Messenger’ for the Malaria-No-More campaign in 2015. Third, I was appointed National Goodwill Ambassador for Leprosy in 2016. Fourth, I was appointed Glo Ambassador. Fifth, I was appointed Glo consultant in the Glo TV comedy series – Professor Johnbull in 2016. Sixth, I was inducted as African Goodwill Ambassador 2015 in Los Angeles U.S.A, with an all expenses paid trip.”

Also, from far away The Gambia, ”in February 2015, I received an honourary invitation from the president, His Excellency Yahya A.J.J Jammeh, to attend the 50th anniversary of the country. He gave me a piece of land in the nation’s new capital layout, alongside over 20 Nollywood artistes. Here in Nigeria also, I received a piece of land in an artistes village, courtesy of the Chief Executive Officer of NUMATVILLE, Dr. Akin Olowookere.”

Unquestionably clear about how his testimonies came to be, Okpala declares: ”All these favours where made possible by the power of the Morning Water and Faith Bracelet. May God continue to replenish the source of the Morning Water, and may the tank never run dry! Praise the Lord! Emmanuel!”