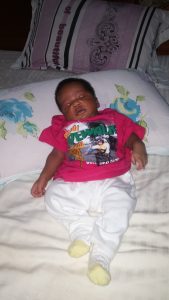 Allen watched with sadness as months of expectation were swallowed up by years of barrenness. He prayed to God. And in 2016, four years after he and his wife began the search for the fruit of the womb, the woman conceived!

The unhappy wait gave way to joyful anticipation until doctors’ reports indicated things may go a little differently. “She would have to deliver the baby through a C-section on December 20, 2016,” they told the hopeful father.

“I didn’t agree with the doctors’ opinion,” said Mrema. It was time again to call on the Lord. “I decided to seek favour from God concerning my wife’s pregnancy and delivery,” he said.

Privileged to get a hold of the Morning Water, “anointed by Jesus Christ and given to the Man of God, Senior Prophet T.B. Joshua,” Mrema prayed along with Emmanuel TV and ministered the Water on his wife, saying: “God of Prophet T.B. Joshua! I know you have done so many wonders through this Morning Water. I know you are going to do the same for my wife. She is going to deliver the baby normally and safely without being operated. She will put to bed like Sarah and other Hebrew women in the Holy Bible.”

Six days, December 14, 2016, to the time scheduled by the doctors, Mrema’s wife was delivered normally and safely of a bouncing baby boy! He exclaims: “The mother and Baby Nathaniel are doing very fine, to the glory of God!”

Have you trusted the Lord once? Trust Him again!